Animorphs Book 29: The Sickness by K. A. Applegate

Cassie has to brave a dangerous rescue mission alone as the rest of the Animorphs are incapacitated by an illness that follows them across morphs. There's a lot of loneliness and fear as Cassie has less help when they all get sick.

This builds on the Yeerk peace movement first discussed in The Departure, and continues Cassie’s interactions with Aftran in a very important way. There’s a lot of tension in this story, as Cassie slowly takes on the roles normally held by her fellow Animorphs when Ax’s illness spreads. It seems like her way of trying to cope, like if she says what they would have said then somehow everything will be okay. I really like Erek’s calming presence, not taking over but assisting Cassie however he can. This is at least the second book in short succession that has the Animorphs needing to race a ticking clock (most recently was #27, The Exposed). 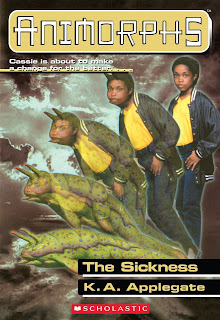