Animorphs Book 27: The Exposed by K. A. Applegate

A force interferes with the Chee and the #Animorphs must race the clock to find the Pemalite ship. Meeting Drode, we learn how much Crayak hates Jake & is fascinated by Rachel. Rachel's claustrophobia is more pronounced, Tobias braves the water.

I'm appreciating how much more complex Rachel is, much earlier than I appreciated previously. If you had asked me when Rachel's character became more complex I would have named a book we haven't reached yet. I'm excited, because I liked the later parts of her storyline from previous readings, so it's nice that I'm appreciating the earlier sections this time through. Tobias and Rachel's friendship/relationship moves along a little, but they haven't reached an equilibrium yet and it's still uncertain where things will end up. 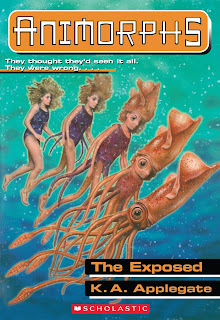