Animorphs Book 25: The Extreme by K. A. Applegate

The Animorphs discover the Venber and try not to freeze to death. They turn to Cassie as the ethical voice. This book has a few new morphs and a lot of being deadly levels of cold, truly, it's hard to overemphasize how cold they are in this one.

This book feels like it's setting the stage for later action, I'm also pretty sure it's the first time the entire group have gotten the exact same morph at the same time. There's some body horror because HAVE I MENTIONED THE COLD and that's not great for carbon-based bodies from the temperate zones of the Earth. It's not filler and it shouldn't be skipped, but it definitely is moving some pieces in place that will be used later, and that can be felt in the book.

We see the continuing threads of tension between Cassie and Marco, lingering from his distrust over her actions in Animorphs 19, "The Departure". Cassie also seems to be getting pretty sick of everyone assuming she is the arbiter of ethics, we'll have to see if that comes to a head or if she adjusts (I truly don't remember which it is as I type this). 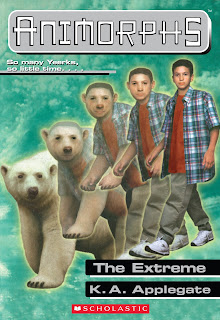