Animorphs Book 30: The Reunion by K. A. Applegate

Marco has an opportunity to eliminate Vissers One and Three, but only if he can hold it together and keep the bright line. We see his inclination towards ruthlessness, but also the stark reality that he's just a kid with an impossible choice.

Marco's self-assessment is both honest and aspirational. He is right that he sees the "bright line" from A to B, but he holds on to the idea that it will stay that simple when the life of someone he loves is on the line. It's simultaneous a mature and honest assessment of his capabilities, and a hopelessly naive belief that starting down this path won't in itself make it harder to finish.

I don't mean to be cryptic, but this one is incredibly interesting, terribly sad... and full of spoilers for Marco's entire arc so far. 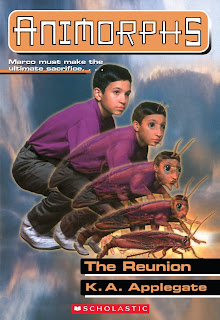