Animorphs Book 31: The Conspiracy by K. A. Applegate

Jake tries to make a tough call, but it's too personal for him to stay careful. Ax does something for Jake that crosses a line. Jake's nightmares are getting worse, and his waking life isn't much better in this one.

Jake has to choose between his father's life and his brother's life, and the stress is breaking him. Most of the books have a casual mention of nightmares, but Jake's books are the ones which most frequently describe what they were. I get the feeling that the details of them are what most disturbs him, not just that they keep happening. He also realizes that he understands his great-grandfather a little better, specifically the part of him that was a WWII veteran.

This book deals with themes (and depictions) of kidnapping, interrogation, torture, murder, and lots of depictions of ptsd. The books never say that the Animorphs have ptsd, but everything about these books scream that they have it (or at least the hollywood version) and it's getting worse. 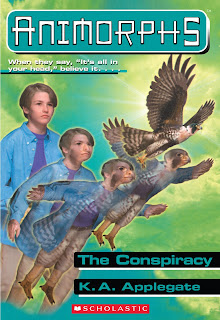