Animorphs Book 40: The Other by K. A. Applegate

This book confronts the Andalite ableism that has been shown since early in the series. It examines norms, friendships, and prejudices through an alien lense. This is all during a high-stakes life or death mission that’s standard for this series.

I appreciate the angle taken in this book, it acknowledges human ableism while pushing back on ableist language in general using a sci-fi analogue. On the podcast we frequently find ourselves using the concept of a magical analogue as a way to examine a type of trauma while keeping it separate from what the reader could actually experience. This book confronts both the specific Andalite prejudice against physical disabilities and non-normative bodies, while also using the Animorphs’ particular situation to push against any idea of a “normal” that could be used to judge and demean anyone.

For Marco this is a break from the ongoing issue of Visser One, but even though nothing changes on that front it’s clear that it weighs on him. This isn’t a light book, but it deals with a different issue than Marco normally faces, which itself can be a break of a kind. 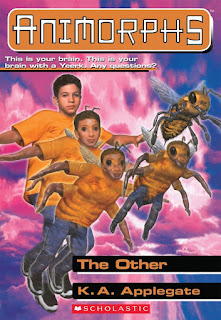