The Chosen and the Beautiful by Nghi Vo

Jordan Baker grows up in the most rarefied circles of 1920s American society--she has money, education, a killer golf handicap, and invitations to some of the most exclusive parties of the Jazz Age. She's also queer, Asian, adopted, and treated as an exotic attraction by her peers, while the most important doors remain closed to her.

But the world is full of wonders: infernal pacts and dazzling illusions, lost ghosts and elemental mysteries. In all paper is fire, and Jordan can burn the cut paper heart out of a man. She just has to learn how.

Nghi Vo's debut novel The Chosen and the Beautiful reinvents this classic of the American canon as a coming-of-age story full of magic, mystery, and glittering excess, and introduces a major new literary voice.

This is a retelling of THE GREAT GATSBY so good that it made me finally get what literally happened at the end of THE GREAT GATSBY, which was a mystery large enough to vaguely bother me since high school, but so far not quite frustrating enough for me to circle back and fill my knowledge gap. THE CHOSEN AND THE BEAUTIFUL reframes Daisy's friend Jordan Baker as a queer Asian adoptee with a talent for magic and an uneasy position at the upper strata of a society which is intrigued by her right until it casts her aside.

Based on my hazy recollection of the original, this is a beat-for-beat retelling. Because Nick (the original point of view character) and Jordan spend significant stretches of time in separate places, this book takes advantage of that time to focus in on Daisy as she's seen by Jordan away from Gatsby, and to make explicit a great many things which were just heavily implied before. If you've never read The Great Gatsby, don't worry about it, you don't need that book in order to understand this one.

I love the use of magic, everything from the paper creations to treating demoniac as one more opportunity for vice in the midst of Prohibition. The characters are vibrant, and the way Jordan's position as simultaneous insider (affluent, friends with Daisy) and outsider (queer, Asian, adopted) sets her up to poke at the strangeness of some moments and ride with the feeling of others. Part of what this makes explicit is just how much sex was happening in and around Gatsby's parties. It starts out heavily implied, almost coy as Jordan refers to sleeping at different women's houses but not saying exactly what she did there, but gradually it becomes more and more clear. I love this portrayal of a young bi (or possibly pan) woman who knows what she wants and feels free to explore. She gets a chance to meet other Asian people and start to explore a side of herself which she lost easy access to as an adoptee. This gives her room for a storyline separate from the sensual but volatile combination of herself, Nick, Gatsby, and Daisy, and it works really well. It plays with expectation, illusion, disappointment, and surprise in a way that supports the main story but explores a part of her that their society only mentions to say they (most often Tom) didn't mean for that microaggression to catch her.

This is an excellent retelling which doesn't need the original in order to be understood. It uses the original's themes of excess, alienation, the desperate need to be loved, and the loneliness of a crowd, then combines them with marginalizations of queerness and race to give them a poignancy and context that leaps off the page. 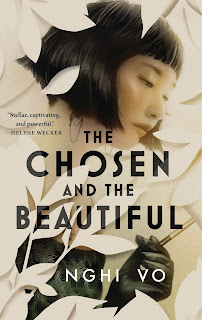