Clock mechanic Danny Hart knows he's being watched. But by whom, or what, remains a mystery. To make matters worse, clock towers have begun falling in India, though time hasn't Stopped yet. He'd hoped after reuniting with his father and exploring his relationship with Colton, he'd have some time to settle into his new life. Instead, he's asked to investigate the attacks.

After inspecting some of the fallen Indian towers, he realizes the British occupation may be sparking more than just attacks. And as Danny and Colton unravel more secrets about their past, they find themselves on a dark and dangerous path--one from which they may never return.

CHAINBREAKER by Tara Sim is a historical sci-fi/fantasy story about gay boys in love across what feels like an impossible distance. It features clocktower terrorists, the complexity of colonial rebellion, and what Danny believes are too many zeppelins.

I love this book, I loved every minute of reading it, and I'm just so happy about it. I love the way Danny and Colton's relationship has changed subtly and feels more established than when they first got together. Because of plot reasons they don't actually spend much time in scenes together, but this means we get to see Colton on his own, as his own person, which I love. I'd guessed the general shape of his origins and I was right in a manner more horrifying than what I'd vaguely anticipated, the reveal scene is well-written and emotionally devastating in all the best ways. I like Daphne much better here now that she's one of the main narrators, and I appreciate that her heritage is relevant without tokenizing her. The antagonists are genuinely scary, and the mystery of what's going on with the attacks and bombings is very compelling. The reveals in the last few chapters were shocking in a satisfying way, they were consistent with the narrative while also being a surprise during this first reading.

I liked India as a setting and I liked how there are several named Indian characters who are featured and important to the plot. Because a large part of the story revolves around a fictional version of Indian rebellion under British rule and occupation, the variety of Indian perspectives helped keep any one character from appearing to speak for the whole country, especially when part of the point is that it's complicated and there's no one clear answer but the characters have to decide how they will live and act anyway.

This doesn't really wrap up anything left hanging from the first book, but that's more a feature of how self-contained the main plot of the first book is, it didn't leave much hanging. It continues some interpersonal relationships that were established there, but it doesn't close out anything I can think of, exactly. The main storyline starts here and wasn't present in the first book, and some of what it introduces is resolved, but this kind of feels like book one could have stood alone, and then this is the first half of something that will be resolved in the final book of the trilogy. That's a really common (and generally good) structure for trilogies, and it works really well for this series. There's a lot of stuff for the third book to pick up and address (like the cliffhanger ending!), so I'm very eager to read that conclusion. Danny returns as a narrator, and some more minor characters from the first book get to narrate their own experiences here. Their voices are distinct and tend to match their portrayals from the first book really well. This might make sense if someone picked it up at random and didn't know about the series as a whole, especially since a lot of the world-building is devoted to showing India and their version of the clocktowers.

I feel strange saying this, but I'm impressed with how the homophobia was handled. It was established in TIMEKEEPER that Danny is gay, and there's a pretty clear implication that it's discouraged or possibly actively despised in England, but it kind of takes a backseat to the "greater issue" that his lover is a clocktower spirit (who aren't supposed to exist). CHAINBREAKER, the homophobia intersects with racism in what I understand to be an historically accurate way, but its depiction on the page is as minimal as possible while still clearly conveying what's going on. It revolves around characters dealing with the potentiality of homophobia and racism, and shows how that affects their lives, but doesn't give much focus to the characters who have been established as bigoted, since the main characters do their best to avoid them. That said, homophobia, various forms of bigotry, and othering of a main character are major themes in this series, so check out the CWs if you're not sure whether you want that right now.

This is great and I'm looking forward to FIRESTARTER! 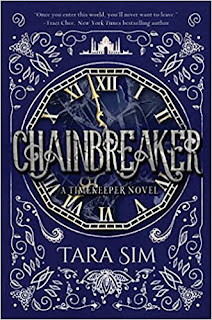 Labels: YA: Fantasy YA: Historical YA: Science Fiction