Realm of Ash by Tasha Suri (The Books of Ambha, #2)

The Ambhan Empire is crumbling. A terrible war of succession hovers on the horizon. The only hope for peace lies in the mysterious realm of ash, where mortals can find what they seek in the echoes of their ancestors' dreams. But to walk there requires a steep price.

Arwa is determined to make the journey. Widowed by a brutal massacre, she's pledged service to the royal family and will see that pledge through to the end. She never expected to be joined by Zahir, the disgraced, illegitimate prince who has turned to forbidden magic in a desperate bid to save those he loves.

Together, they'll walk the bloody path of their shared past. And it will call into question everything they've ever believed...including whether the Empire is worth saving at all.

In REALM OF ASH, Arwa is steeped in grief and blood, haunted by a massacre and isolated by her widowhood. The Empire which shaped her is crumbling, but she tries to be useful once more by walking in death and memory. She reckons with the weight of generations of grief and trauma, the legacy of a slow genocide caused by the Ambhan Empire forcing generations of Amrithi to choose between death and slavery over and over.

Where EMPIRE OF SAND had a quality to the worldbuilding where it felt like it was being illuminated around the main character as she walked through the world, REALM OF ASH has an actual magical/spiritual which is actually created or revealed as Arwa and Zahir move through it. It also maintains this style in a more mundane way, through Arwa's sheltered upbringing and restrictive marriage, followed by the cloistered nature of Ambhan widowhood, setting her up for learning the nature of many things for the very first time within the story. She's naïve in some things but quick to learn, and the combination of newness and grief drive her attempts to help Zahir with his work. I loved their dynamic, the way they shift from total strangers to depending on and supporting each other in uniquely trying circumstances.

This wraps up a very specific question left hanging from the first book: that of Arwa's fate. The main storyline starts here and wasn't present in EMPIRE OF SAND, the main character is Arwa this time, and her voice is very different from Mehr's. A lot of very major things are introduced and resolved here, it functions almost as a stand-alone book except that it is dealing with the fallout of events from EMPIRE OF SAND. Someone could pick it up and understand 95% of what's happening even if they hadn't read EMPIRE OF SAND. What gives it that stand-alone feeling is that, because Arwa doesn't actually know what happened in EMPIRE OF SAND, except for what is known publicly in the empire, her point of view doesn't require the reader to know much from that book in order to keep up with the main plot of this one. This answers what happens next and how the empire is dealing with the far-reaching consequences of the first book's conclusion. REALM OF ASH feels very complete, taking the time at the end to answer a little of where Mehr ended up, making the duology feel whole, with neither book subordinate to the other.

I adore this book, I like it even better than EMPIRE OF SAND, something I didn't think was possible. There's no more in this series, but I plan on checking out other books by this author. 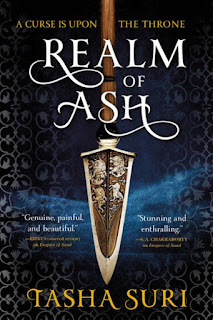