Lost in the Never Woods by Aiden Thomas

It's been five years since Wendy and her two brothers went missing in the woods, but when the town's children start to disappear, the questions surrounding her brothers' mysterious circumstances are brought back into the light. Attempting to flee her past, Wendy almost runs over an unconscious boy lying in the middle of the road...

Peter, a boy she thought lived only in her stories, asks for Wendy's help to rescue the missing kids. But, in order to find them, Wendy must confront what's waiting for her in the woods.

As a Peter Pan retelling, this fits into a sweet spot between “the story you remember happened a long time ago” and “the story you’ve been told was wrong”. Wendy doesn’t remember what happened when, five years ago, she was missing for six months, then suddenly reappeared without her brothers. There’s a sense of frustration running throughout the story as it becomes more and more apparent that Wendy’s missing memories are important, but she doesn’t know if she’ll ever get them back. It meant that when the book finally gives some answers almost at the very end there’s an enormous catharsis. I wasn’t frustrated at the book, I was frustrated for the characters, and so watching them (particularly Wendy) get answers and closure was immensely satisfying. I spent the first 80% liking it but not sure what the twist was going to be... and then the twist/reveal happened and I loved it. It's a take on Neverland that I haven't seen before and it works extremely well.

I wish Wendy’s friend Jordan had more of a positive presence, it seemed like she mostly existed as part of the crowd of well-meaning but currently unhelpful figures in Wendy’s life (though the epilogue makes up for a lot of the earlier lack). On the other hand, the feeling of being surrounded by a crowd of people who mean well but literally can't help worked really well to support the themes of trauma, repression, and helplessness which are integral to the story.

I liked this and it showed a new side of Wendy, Peter, and Neverland, which is the best part of any retelling. I'm very glad I read it. 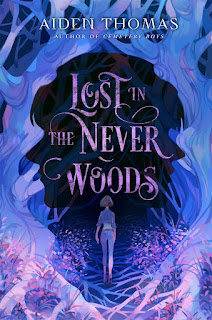