All you need to know is . . . I’m here to divide and conquer. Like all great tyrants do. —Aces

When two Niveus Private Academy students, Devon Richards and Chiamaka Adebayo, are selected to be part of the elite school’s senior class prefects, it looks like their year is off to an amazing start. After all, not only does it look great on college applications, but it officially puts each of them in the running for valedictorian, too.

Shortly after the announcement is made, though, someone who goes by Aces begins using anonymous text messages to reveal secrets about the two of them that turn their lives upside down and threaten every aspect of their carefully planned futures.

As Aces shows no sign of stopping, what seemed like a sick prank quickly turns into a dangerous game, with all the cards stacked against them. Can Devon and Chiamaka stop Aces before things become incredibly deadly?

ACE OF SPADES is a dark academia thriller thriller where two high-achieving students suddenly have everything they thought they knew come crashing down after a mysterious texter begins revealing their secrets one by one.

The pacing is amazing, starting out with hints, whispers, and strange inconsistencies before building into series of much-needed confrontations and gripping turns. The eventual reveal of Aces' identity is narratively satisfying, immediately begging for a re-read once the solution is known. This is a thriller which can absolutely survive that re-read, but this review won't spoil the ending. The alternating perspectives kept things moving, and contributed to the sense of missing information as often events would happen where the other main character would get information and the current point of view character would just get rumors or partial glimpses.

I love Chi and Devon as protagonists, especially the way they interact with (or, early on, avoid) each other. They're very different people who end up having to work together to figure out what's been happening to both of them. They have a lot of time on their own, trying to deal with everything.

The secondary characters are complex without taking over the narrative. Their parents and other figures from home have enough attention to feel like real parts of their worlds while not not being the focus.

This is a thriller with much needed aftercare in the form of updates after the main events. It's just enough to give closure and a sense of where they end up, and it works really well. This is a hell of a debut, I wish there were something else I could read right away because this is just fantastic.

The way different slices of their lives and identities were used to torment them and which parts Aces carefully danced around was very well handled. Because Aces' plan relied on tormenting Chi and Devon for their existence as Black people, but they also didn't want to reveal that that was the reason, they attacked them for everything but that. Everything from outing one of them for being queer, to making them doubt their memories of past events, even the confusion and fear from making sure the target of each particular text was the only one to miss the message each time. All of it came together to make them even doubt that racism was the reason for the bewildering and never-ending harassment. Aces (and the narrative as a whole) used the tension inherent in it being very obvious to an outside observer that race is a motivation when the only two Black kids are the targets of the bullying, but the Black protagonists immersed in their very white school felt like if they said Aces was racist then they would be wrong somehow for pointing out this possibility. It's a facet of how white supremacy upholds itself that it treats the people who call out racism as being as bad (or worse) than the people actually being racist, a point which is made explicitly in the book. The intersection of Blackness and queerness then was used for additional torments, because while both were loathsome to Aces, only one (queerness) was treated like an okay aspect to openly hate. It shows how neither kind of marginalized identity was safe from Aces and their hatred of these characters.

There's a series of final confrontations which I loved but can't say much about without major spoilers. Some of them ramped up the existing tension and some were more emotionally complex where catharsis was sought and not received, or where a confrontation was expected and then didn't go the way they thought. 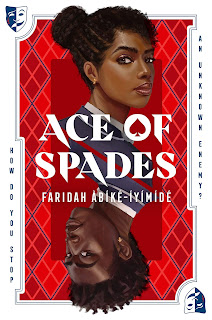