The Mime Order by Samantha Shannon (The Bone Season, #2)

Paige Mahoney has escaped the brutal prison camp of Sheol I, but her problems have only just begun: many of the survivors are missing and she is the most wanted person in London...

As Scion turns its all-seeing eye on the dreamwalker, the mime-lords and mime-queens of the city's gangs are invited to a rare meeting of the Unnatural Assembly. Jaxon Hall and his Seven Seals prepare to take centre stage, but there are bitter fault lines running through the clairvoyant community and dark secrets around every corner.

Then the Rephaim begin crawling out from the shadows. Paige must keep moving, from Seven Dials to Grub Street to the secret catacombs of Camden, until the fate of the underworld can be decided.

THE MIME ORDER is a slow-burn fantasy of allegiances and betrayal as Paige figures out what she wants from her newly reclaimed freedom, and starts to chafe under the formerly familiar restrictions of her Mime Lord.

The first book told a little of what Paige remembered about her Mime Lord and the rest of the Seven Seals. Now, in THE MIME ORDER, she's returned to find things on edge. The world building continues to be excellent, this time around Paige is noticing what's different from before she was away, and it helps give a real reason for the narration to explain so much in book two. Even when it possibly shouldn't be new to her, it is because things have changed a lot. The politics of interrelationships between the factions and people are complex and absorbing, but the way Paige keeps her ambitions clear and (usually) simple keeps it from being overwhelming. There's a dizzying array of options available to her but because of her goals it feels like only one or two are truly available. As she changes what she wants, the narrow world of her choices swivels to a new set of goals. In a setting with endlessly nested factions and motivations (e.g. the Syndicate vs Scion, the Sargas vs the Ranthem, the various Mime Lords and Ladies vs each other), it would be easy to get lost in the details. I appreciated both that this level of detail was present, and that I could choose how much I wanted to try and track it while still understanding the main story.

THE MIME ORDER wraps up a few things left hanging from the previous book. Its whole main storyline starts here and wasn't present previously, and includes a bunch of major things that are both introduced and resolved in it. It leaves some very big things to be picked up by the sequels. The main character is unchanged from THE BONE SEASON, and her voice is consistent across both books. This might make sense if someone started here and didn't know about the rest of the series. Part of that is because it's book two of a planned seven books, and so it doesn't quite yet have the depth of backstory as later entries will inevitably contain. The other part is that (probably because it's a seven book series) the main storyline is largely self contained. It matters that any reader knows Paige was imprisoned, and by whom, and that she has certain allies (both those she obtained during THE BONE SEASON and ones from before her imprisonment), but all of that can be picked up from the way events are handled here. I like this style, it works a little better than in THE BONE SEASON, where I constantly felt like Paige was talking about some earlier book I hadn't gotten to read, since The Seven Seals matter so much to the series as a whole but were mostly only described by Paige rather than shown in that first book. They matter here, and having learned about them previously helps that transition from her imprisonment to being back home.

I love this book and I'm definitely going to keep reading the series. The ending is great, it's a perfect blend between resolving the main tensions from this book and setting up clear stakes for a conflict in the next one. I feel like I have closure as well as knowing what questions I want answered next time, which is ideal for such long books in a long series. 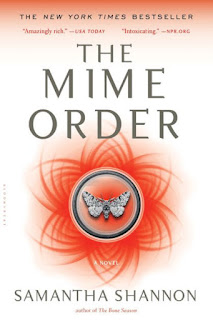