The Raven King by Maggie Stiefvater (The Raven Cycle, #4)

All her life, Blue has been warned that she will cause her true love's death. She doesn't believe in true love and never thought this would be a problem, but as her life becomes caught up in the strange and sinister world of the Raven Boys, she's not so sure anymore.

THE RAVEN KING is the perfectly fitting conclusion to The Raven Cycle. Blue and the Raven Boys search for Glendower one last time as a nearly defeated foe begins to unmake everything they've fought to protect. The teens crumble at their edges while fighting not to shatter, and a new friend helps them hold everything together.

I'm so happy about Henry as a character. He had a slight presence in the previous books and is very welcome here. The pit scene with Henry and Gansey was chilling, dripping with threats, promises, and hope, all at once. The central group of Blue and the Raven Boys shifts even more as they start facing things they weren't ready to handle before, speaking truths previously left unsaid. The plot is more nebulous than the previous books, this time they're mostly existing and trying not to die, staving off a destructive force that eats up the narrative and any more complex plans they might have had. It works very well as the conclusion to a quartet, but I don't know that I could recount the actual story of this book. The narration for the four main kids (especially but not only Blue) is such a perfect encapsulation of a certain way of being a teenager, my favorite example of this is the whole of chapter 32 when Blue is waiting for the bus to move. It captures the way her thoughts skitter and circle around a sense that something is deeply unfair and structurally wrong, that the course of her life which led to this moment didn’t have to go this way. The whole series has been filled with moments like this, quirks of thought that aren’t limited to the transitory time that is the late teen years, but which belong perfectly there.

This wraps up a lot of things left hanging from the first book, since it is the last book it also wraps up things reaching back all the way to the first book. This includes but is not limited to the book-one prediction that Gansey would die. Henry was introduced previously, but has a much stronger presence here and his inclusion helps bring the feeling that this volume has its own storyline separate from the previous three, but everything bends back towards continuing and resolving things from earlier in the quartet. If I'm being honest, I don't quite think it has something that starts here and wasn't present (or heavily implied) before. It's not new that people are coming to Henrietta to try and get the magic, though that ramps up here, Henry isn't new though he feels fresh here, and the emotional core of the book is to settle whether it's possible to find Glendower, and to resolve the fates of Gansey and Cabeswater. If there is a small thing which is both introduced and resolved here I think it must relate to Henry, but I can't actually bring anything to mind. All the narrators have been point of view characters in at least one of the previous books. Their voices are distinctive from each other, and one of my favorite parts is the way they're all quintessentially teenage while being different flavors of teenager. This would not make sense if someone picked it up at random and didn't know about the series. It's stuffed with magic and mystery, doesn't pause to explain the why of Cabeswater, Blue's family, Ronan's family, really it doesn't explain the origin of any of their families, except in ways that answer questions you would only have if you'd read the first three books, without answering any of the things someone would ask if their first exposure was here in book four. This is perfectly fine for a series finale, and I think it does enough to connect this volume to the previous ones in ways that would provide a refresher if someone picked this up a while after reading BLUE LILY, LILY BLUE, but it's not intended to stand alone and makes no pretense of it.

I liked the ending overall, but I did come away with a few questions about what happens next. The ending does a pretty good job of conveying the trajectory after the story is over, so I think my feeling of something being missing is mostly that I just want to spend even longer with these characters. I love this series as a whole, and this is a strong conclusion to a wonderful quartet. If you like YA fantasy in a contemporary setting, give The Raven Cycle a try. 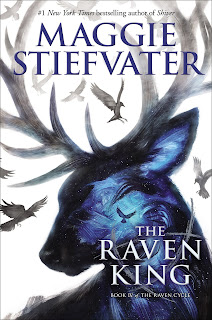