In a political fantasy unlike any other, debut author C. L. Clark spins an epic tale of rebellion, espionage, and military might on the far outreaches of a crumbling desert empire.

Touraine is a soldier. Stolen as a child and raised to kill and die for the empire, her only loyalty is to her fellow conscripts. But now, her company has been sent back to her homeland to stop a rebellion, and the ties of blood may be stronger than she thought.

Luca needs a turncoat. Someone desperate enough to tiptoe the bayonet's edge between treason and orders. Someone who can sway the rebels toward peace, while Luca focuses on what really matters: getting her uncle off her throne.

Through assassinations and massacres, in bedrooms and war rooms, Touraine and Luca will haggle over the price of a nation. But some things aren't for sale.

THE UNBROKEN is a tale of colonialization, uprising, and a stolen child returning to her homeland as a conscripted soldier ordered to bring it to heel. Touraine is one of the Sands, the term for Qazāli people stolen as children and raised to be soldiers by the Balladaire. This puts her in the position of being used to enforce restrictions on the people she came from. Events early in the book remove her from the Sands, the people she's lived with, fought alongside, and bled with all her life to instead be in service to princess Luca. The rest of the book explores Touraine's confused attempts to figure out what she wants and what she's willing to die for, as well as Luca's desperate attempts to hold on to power through the slim thread of her uncle's distant regard and her subordinates' loyalty. One of the strengths of THE UNBROKEN is it highlights the way that someone who is marginalized in their own group but has power and privilege over another group often uses that relative power to gain a sense of control by oppressing someone else. Luca's physical disability and precarious political position lead her to make harsher choices in order to not appear weak, something that would probably be less on her mind if she weren't constantly worried about people mistaking her physical impairment for lack of will.

The tension between Luca and Touraine is very well handled, as throughout the story their dynamic as a pair constantly shifts, but they're never quite on the same page about the nature of their relationship. It showed over and over how no matter how attracted they might be to each other, the gulf of power between Luca's position and Touraine's means that it's impossible to trust any "Yes" from Touraine when Luca can have her tortured or killed for a "No". This affects everything from their mutual attraction to the treatment of the Sands to the handling of the rebels.

I love the portrayal of the Qazāli rebels, I can't discuss much there without spoilers but they were dynamic as a group and as individuals, each with their own reactions to Touraine and Luca's various intrusions on their lives, as well as the reality of life under Balladaire's oppressive colonial rule.

I'm looking forward to the sequel, I'm a little worried that it'll only get worse for the characters from here but I want to know what happens next. 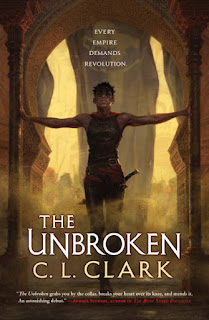