Empire of Sand by Tasha Suri (The Books of Ambha, #1)

The Amrithi are outcasts; nomads descended of desert spirits, they are coveted and persecuted throughout the Empire for the power in their blood. Mehr is the illegitimate daughter of an imperial governor and an exiled Amrithi mother she can barely remember, but whose face and magic she has inherited.

When Mehr’s power comes to the attention of the Emperor’s most feared mystics, she must use every ounce of will, subtlety, and power she possesses to resist their cruel agenda.

Should she fail, the gods themselves may awaken seeking vengeance…

EMPIRE OF SAND is a transformative story of vows, agency, and choice, a slow-burn romance between two people who didn't get the chance to freely say yes, and the cruel power of a man bending even gods' dreams to his will.

The main character (Mehr) is biracial in a fantasy setting, and part of the story is how this combination of identities is distinct from being merely half of one identity and half the other, but is also/instead its own thing. Her father is from the main ethnic group in the ever-expanding empire which is slowly devouring the desert while exploiting the gods' dreams, her mother is from a nomadic people who are used for the magic in their blood. Often the characters who seek to use her are trying to exploit one part of her heritage rather than treating her as a unified whole, and her narration shifts in how she describes herself throughout the text as her relationship with and self-conception of her identity changes.

The world building is really good, it focuses on the people in a way that highlights the space, and whole effect comes off wonderfully. Information about the setting comes up as it matters to Mehr and the people around her, like walking through a space slowly which is being illuminated as it's described by someone who cares deeply about it.

The villain is genuinely chilling, taking advantage of how easy it is for powerful abusers to control how much of their cruelty is on display to any one person. There's a sense of helplessness (frequently explicit) that Mehr is surrounded by people who wouldn't believe her if she truthfully claimed that the marks on her skin were caused by the Maha, it's made worse when some of the women at the temple keep trying to save her... from the husband she didn't choose but is slowly getting to know. They can clearly see that she's being abused, but because of how totally the Maha has enthralled them they wouldn't believe the truth. Mehr has a lot of compassion for the servants and mystics around her, referring repeatedly to the way that it makes sense that they would love so completely this person, the Maha, who has done nothing but hurt Mehr. The slow pacing helps convey the tension and uncertainty of living around someone who has been unspeakably cruel and might be so again, sometime, but not necessarily right now.

One of the strongest messages around choice in this book is that finally getting to choose doesn't have to mean avoiding something you were previously forced to do. If it did, then it wouldn't really be free, because then every action would still be dictated by that prior lack of agency. I love the slow burn romance, every quiet moment and intimacy has so much feeling behind it, they care so much about consent even though their abuser is contriving to remove all their choices, it's just done so well.

I'm definitely reading the sequel, I want to see what they'll choose to do next! 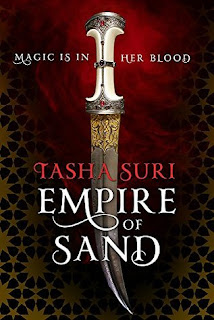