Where Nirrim lives, crime abounds, a harsh tribunal rules, and society’s pleasures are reserved for the High Kith. Life in the Ward is grim and punishing. People of her low status are forbidden from sampling sweets or wearing colors. You either follow the rules, or pay a tithe and suffer the consequences.

Nirrim keeps her head down and a dangerous secret close to her chest.

But then she encounters Sid, a rakish traveler from far away who whispers rumors that the High Caste possesses magic. Sid tempts Nirrim to seek that magic for herself. But to do that, Nirrim must surrender her old life. She must place her trust in this sly stranger who asks, above all, not to be trusted.

Set in the world of the New York Times–bestselling Winner’s Trilogy, beloved author Marie Rutkoski returns with an epic LGBTQ romantic fantasy about learning to free ourselves from the lies others tell us—and the lies we tell ourselves.

I loved this while I was reading it, and now that I've put it down I'm torn between wanting the sequel, and not trusting that the sequel will be satisfying given how this book ended and some other issues which I'll discuss. Firstly, what this book is: THE MIDNIGHT LIE is a sapphic story of moments of happiness amid oppression and abuse in a fantasy setting. It's about loving small joys and good things for their transience, not in spite of it. It's a heartbreakingly relatable portrayal of trauma bonding, abuse, and betrayal, piling small cruelties atop systemic injustices in a setting where escape isn't enough.

One thing this does very well is show what gaslighting can look like in a way that gently and persistently provides a series of outside voices to counter the narrative being fed to the main character by her abuser. Her protests of this person's goodness and faithfulness become smaller and smaller until she finally has to decide what to do with the information she has been given. It begins subtly and slowly builds in a way that makes it a useful example of how insidious the abuse is and how much her abuser is controlling her understanding of reality, beginning when she was a much younger kid. As much as it muddles the message a little, I'm glad that the people trying to point out the one person's abuse aren't paragons themselves, that's especially important because it stop the main character from just switching which character has her undying loyalty.

I like how queer this is but please don't pitch it to anyone as a sapphic romance. It's sapphic, there is a romance, but the combination of traits implied by that conjoined phrase is not representative of this book. So much of the emotional core in THE MIDNIGHT LIE revolves around whether and how to trust untrustworthy people, whether they can't be trusted because they're personally cruel, they're not powerful enough to provide protection from the system, or they're impermanent and nothing and no one lasts forever. This commentary on untrustworthiness and betrayal makes for a fascinating book but an emotionally fraught romance. I'm also concerned about possible biphobia and transphobia from some interactions with the love interest. The words the love interest chooses when expressing jealousy are suspiciously similar to some biphobic and transphobic talking points and it was uncomfortable to read, waiting to figure out whether the character was bigoted or just insecure and using bigoted language to convey those feelings. I think it's more the second one, but I remain unsure.

The end-of-book revelations about the truth of the setting worked well and made things make sense but I hate the decision that the main character made with that information. I don't know what she should have done instead given what she learned, but I hope the sequel takes the consequences of her choice seriously and doesn't treat it flippantly. I want it fixed but I don't want it cheapened by being handled too quickly. 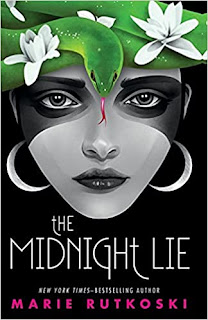