When her wife Cressidae goes missing, Teagan immediately knows where she has gone. A kingdom of the dead filled with untold nightmares, the Shadow Realm is the only place that can save Teagan from a lethal poison that’s killing her slowly. It is ruled by a princess said to make powerful deals with those brave enough to find her, and Cressidae has gone to bargain for Teagan’s life. Cressidae has forgotten one very important thing: no one makes it out on their own.

Teagan is furious Cress left without her, yet she’s determined to save her. The princess of the Shadow Realm, however, doesn’t let mortals roam her territories without opposition. In this thrilling tale inspired by the myth of Orpheus and Eurydice, Teagan and Cressidae must face both the horrors of the Shadow Realm as well as their own past.

THE BONE WAY is a sapphic Orpheus and Eurydice retelling exploring illness, grief, sacrifice, and love as Teagan enters the kingdom of the dead after her wife Cress went alone to beg for a cure.

I love the flashbacks interspersed between sections of the present timeline, they gave welcome context and helped even out the pacing. The descriptions are vibrant, and the cast of characters is suitably small for a novella. My favorite detail is the backstory for the queen, it has messy complexities and leaves those jagged edges unresolved. This would make sense even if you haven't encountered this myth previously. As a retelling this obviously draws inspiration from the myth but doesn't refer back to it explicitly.

I liked this and I'm glad I read it! 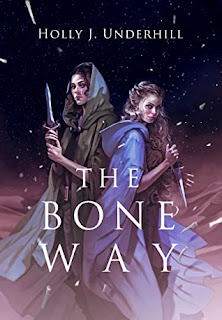