The trick with found things, though, is how easily they can be lost.

BLUE LILY, LILY BLUE finds Blue with her world in turmoil after her mother's disappearance. The closer she and the Raven Boys become, the more they realize they don't know each other at all.

This is a point of inflection. As the teenagers finally pause a little to process the changes and revelations from the first two books they start to understand the assumptions they've been making until now, and even question them. It feels like they've grown so much since the first book, in a bunch of ways, but they're also a bit scattered as they needed to do things more on their own for a while. Large portions of the book feel like the calm before a storm, and the leading edge of it finally hits at the end of the book in some pretty devastating ways. I feel strange about it because I'm excited more for how this moves various pieces and plot points into place rather than being happy about anything in particular that happened. There's a lot of little moments I loved (Adam shines especially here, this portion of his arc is so good), but it's definitely getting ready for big things rather than actually doing many of them.

The best part of the book for me is definitely the moments when the characters pause to reflect on their inner worlds and their relationships with each other. This book is filled with those moments, sometimes because they're stressed and sometimes because they have a moment of calm, but they make their character growth evident in a bunch of little ways. I love how each of them keep thinking of themselves in relation to each other, and how their perceptions of each other have changed so much since the start of the series. I'm so happy for Adam, in particular, that he's figuring out when and whether he wants help rather than constantly refusing it or feeling like it's giving up to accept it.

The ableist language surrounding a particular new character was disappointing. Yes, the circumstances in which they found her would be hell on anyone’s mental health, but having her most frequent descriptor be variations on the same derogatory language about mental health over and over was very frustrating to read. Additionally, one of the antagonists seemed as though her main trait was finding ways to casually drop ableist slurs into every conversation. I do recommend this as part of the quartet, but it was frustrating enough that I don't know if I would recommend it if it were stand-alone.

This moves the plot forward on some things from the second book, but I can't think of anything that it wraps up completely. It doesn't really have its own storyline, there's a pair of antagonists who weren't physically present previously but at least one of whom was introduced in the second book. The biggest plot point in this book began in the last one and plays out here, but there is a pretty major thing which has its biggest moments in this book (even then it was technically teased in the first book, looked for in the second, then found here). This left a bunch of things to be resolved in the final book, some of which have been hanging since the start of the series. There's a mix of new and returning narrators, and all of their voices are distinct. This is very much a step on the way to the final volume, so it's not a problem that it couldn't stand on its own very well as its book three of a quartet. There's too much history needed for someone to understand most of the plot and its importance, and I don't think it would make sense if someone picked it up at random. That being said, it's good enough about naturally recapping important stuff that if it had been a while since reading the first two books it would probably be pretty easy to follow.

Overall it works as the third entry in the quartet but it has some frustrating ableism that makes me like it less than the first two books. 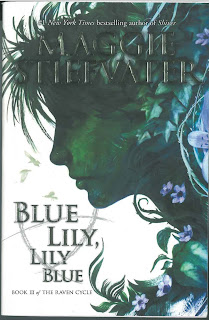