Thanks to Connor, Lev, and Risa—and their high-profile revolt at Happy Jack Harvest Camp—people can no longer turn a blind eye to unwinding. Ridding society of troublesome teens while simltaneously providing much-needed tissues for transplant might be convenient, but its morality has finally been brought into question. However, unwinding has become big business, and there are powerful political and corporate interests that want to see it not only continue, but also expand to the unwinding of prisoners and the impoverished.

Cam is a product of unwinding; made entirely out of the parts of other unwinds, he is a teen who does not technically exist. A futuristic Frankenstein, Cam struggles with a search for identity and meaning and wonders if a rewound being can have a soul. And when the actions of a sadistic bounty hunter cause Cam’s fate to become inextricably bound with the fates of Connor, Risa, and Lev, he’ll have to question humanity itself.

Rife with action and suspense, this riveting companion to the perennially popular Unwind challenges assumptions about where life begins and ends—and what it means to live.

It’s tricky to pivot from a stand-alone book into book two of what is retroactively transformed into a series, but this manages it pretty well. The expanded scope of the dystopia’s history and new plotlines fit pretty well into what UNWIND left behind. The mere fact of the War and the Accords is given more detail and proximate causes in a way that is consistent with the earlier information even as it provides direction for the series going forward. While I like UNWIND a bit more than UNWHOLLY, I’m pretty pleased nonetheless and I look forward to finishing the whole series.

It continues several things left hanging from UNWIND but doesn't really wrap them up. It has several storylines which start here, and a few major things that are both introduced and resolved. It leaves a lot to be addressed in the future, including enough info to give a sense of a possible trajectory or next step for some of it. Some of the narrators are returning but most are new. Other than what information they have access to, I don't think the characters were very distinct. That might be because there are so many narrators that they blur together no matter how well they're written, I'm not sure. This might make sense if someone started here and didn't know about the first book, since this is starting a new arc for the series.

There are two story decision which seem strange and might be particular distressing. The first is that "storked" (involuntarily adopted) kids are more likely to be unwound. It makes sense, given the worldbuilding, and I appreciate the synergy between the shape of the dystopia and the way it affects the characters. The other strange thing is that (unless I really missed something), there's no mention of kids being unwound for being queer (or being happily queer with their parents and no intention of unwinding). While it would be nice to think that this dystopia meant to be in chronological continuity with real-world early 2000's somehow doesn't have a drop of queerphobia or homophobia anywhere... to me it leaves behind the fridge horror question of "where are all the queer kids?"

Overall I liked it, I'm intrigued by the trajectory and I'm planning to finish the series. 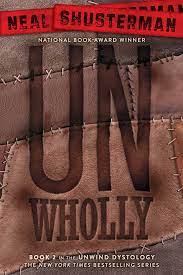