A Psalm of Storms and Silence by Roseanne A. Brown (A Song of Wraiths and Ruin, #2)

Months have passed since the violent coup that upended Princess Karina’s life. She is now a fugitive racing across the desert to sanctuary in the Arkwasian Jungle, where she hopes to find allies to help her reclaim her kingdom from her adopted brother's clutches.

Meanwhile, Malik's illusion magic is flourishing under Farid's tutelage, but the bonds keeping the Faceless King trapped in his mind are weakening. His quest to best the spirit once and for all leads him deep into the dark history of his own ancestors, with an unlikely ally by his side—Princess Hanane, Karina's resurrected sister, who hides more secrets than even she realizes.

As the fabric holding Sonande together begins to tear, Malik and Karina once again find themselves on opposite sides of an ever-worsening conflict, even as their connection flares to a breaking point. And when the fate of the world hangs on a single, horrifying choice, they each must decide what they value most—a power that could transform the world, or a love that could transform their lives.

A PSALM OF STORMS AND SILENCE is the fantastic conclusion to an excellent duology. One of many places where this shines is in its portrayal of trauma and aftermath, but especially in its portrayal of a kind of lingering pain from ongoing emotional abuse. The characters have room to make bad decisions in ways that are completely understandable. I was never frustrated by the choices they make in a narrative sense because the narrative itself made sure I knew whose manipulations, lies, and control of information were driving those bad decisions. It deftly uses a thousand years of self-interest and old grief, showing how they shape the characters' present, even if ways they hadn't realized were connected. It's about how accepting present power with a legacy of past power means both acting responsibly with the power in the present and accepting responsibility for the legacy of harm caused by that power in the past. How a chain of people accepting enormous power but eschewing responsibility for the harm caused by the power lead to even more harm. These layers of trauma, aftermath, resolution, acceptance, and restitution play out within their own lifetimes and on the scale of kingdoms as they try to stop the world from breaking with the grief of a goddess and the fruitless scheming of a dead king.

Karina and Malik's relationship is complicated, with lies and misunderstandings from A SONG OF WRAITHS AND RUIN meddling in what ought to be a simple case of one hunting the other to try and stop the fall of the kingdom. Farid is a well-written manipulator, wrapped up in his own plans and unable to see the difference between someone agreeing with him and one who's just placating him to avert his anger and disappointment from falling on them. His frustrations make sense with his character and circumstances, his increasingly complicated plans hum along in the background of everything Malik and Karina try to accomplish.

This wraps up more than one major thing left hanging from the first book. The main storyline starts here and was only lightly present previously. There are several major things that are both introduced and resolved, and as part two of a duology it’s an immensely satisfying ending. The main characters are the same and they’re consistent with their portrayals in the first book. This might make sense if someone tried to start here and hadn’t read the previous book, it does a good job of referencing prior events without devolving into a full recap. It was definitely enough to pull me fully into the story even though it’s been a while since I read A SONG OF WRAITHS AND RUIN and my recall was initially fuzzy. I'd basically forgotten what happened before and it gently reminded me at gradual intervals as various previous events became relevant. The current stakes and past drama are clearly communicated, and the emotional context is vibrant.

The ending is excellent. There's still a lot of work to do and a lot of life for the survivors to live, and it's okay that this story stops here since it had to stop somewhere. I love the framing device, it satisfied my need to know what happens next.

From the book: "Please note this book depicts issues of self-harm, fantasy violence, emotional and physical abuse, anxiety and panic attacks, grooming, and suicidal ideation. I have done my best to approach these topics with sensitivity, but if you feel this kind of content may be triggering, please be aware." 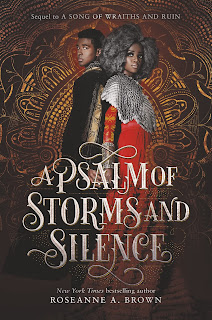