Andrew and Eddie did everything together, best friends bonded more deeply than brothers, until Eddie left Andrew behind to start his graduate program at Vanderbilt. Six month later, only days before Andrew was to join him in Nashville, Eddie dies of an apparent suicide. He leaves Andrew a horrible inheritance: a roommate he doesn’t know, friends he never asked for, and a gruesome phantom with bleeding wrists that mutters of revenge.

As Andrew searches for the truth of Eddie’s death, he uncovers the lies and secrets left behind by the person he trusted most, discovering a family history soaked in blood and death. Whirling between the backstabbing academic world where Eddie spent his days and the circle of hot boys, fast cars, and hard drugs that ruled Eddie’s nights, the walls Andrew has built against the world begin to crumble, letting in the phantom that hungers for him.

SUMMER SONS is a long exhalation after a reckless sprint, a tale of grief and queer masculinity as Andrew slowly wrestles with who his best friend was to him, and the betrayal he feels at finding out after Eddie’s death that other people knew different sides. Andrew begins by resenting every new thing he finds, every way that Eddie was someone else with someone else, and disturbed that these other people would have any interest in knowing him too. As he slowly works his way through his resentment and grief (with the help of an occasional punch to jolt him out of his own ass), Andrew gets closer to the car-racing, hot, young men who filled Eddie’s nights, circling warily around the academics of his days who seem hell-bent on making Andrew pick up where Eddie left off. The problem is that Andrew doesn’t know who he and Eddie were, and the achingly slow process of figuring out what that was is being complicated by the way Eddie’s haunt keeps filling Andrew’s throat with earth, loam, dirt, and death whenever he has a moment alone.

The characterization is complex and well-executed, generally following Andrew’s understanding of the people around him. As he’s able to observe more from behind the veil of his grief, they, too, come into focus. It's a story of queer masculinity, including the difficult tangle of emotions which can make embracing one's queerness without giving up masculinity in the context of a rural Southern existence.

This is beautiful and ultimately satisfying, unafraid to fill itself up with jagged pieces and look you in the eye as it names the broken bits one by one in their slow exhumation from Andrew’s soul. 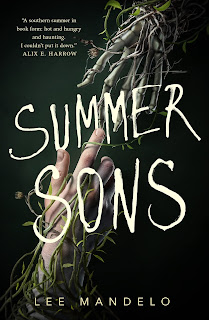