In a faraway land where members of the royal family are named for the virtues they embody, one young boy will become a walking enigma.

Born on the wrong side of the sheets, Fitz, son of Chivalry Farseer, is a royal bastard, cast out into the world, friendless and lonely. Only his magical link with animals - the old art known as the Wit - gives him solace and companionship. But the Wit, if used too often, is a perilous magic, and one abhorred by the nobility.

So when Fitz is finally adopted into the royal household, he must give up his old ways and embrace a new life of weaponry, scribing, courtly manners; and how to kill a man secretly, as he trains to become a royal assassin.

ASSASSIN’S APPRENTICE follows Fitz through his childhood and adolescence, as he learns to be an assassin for the king, and what he’s actually willing to kill for.

The worldbuilding is layered, with things explained as Fitz is told them, supplemented by insights from his older self. This leads to a gradually filled-in impression of a complex setting where details are conveyed as they are necessary, and even more is implied through the narrative. This style lends clarity. He discusses both how he felt at the time, as a child and then a teenager, and what he thinks about those events now that he’s an adult. This becomes especially important during sections such as his time under Galen, as the dissonance intensifies between events as they happened and how he was being conditioned to perceive them. There are several moments where something he does as he’s telling the story is juxtaposed with some assertion made by his younger self, showing how something must have changed in the meantime (presumably to be covered somewhere in the trilogy).

One of my favorite things is his complex relationship with Burrich. How they are to and with each other changes throughout the story. Even when it's changing for the worse, it makes sense, and it's nice to see Fitz's growing understanding of Burrich as a person with his own internal world separate from Fitz. How Fitz views Burrich is often a great proxy for how Fitz is growing and changing, flavored by the dissonance between how Fitz is and how Burrich wants him to be.

There’s a lot of care in the narration, partly due to the balance between Fitz’s memories and his older self’s reactions to and commentaries on the memories, and partly due to what I can best describe as a lack of voyeuristic interest. One of the background plots involves raiders pillaging the coast, and, other than a few scenes where Fitz has to directly fight someone as a result of the raids, there are few descriptions of the kind of violence which accompanies such raids. Said violence is canonically happening, and Fitz frequently discusses the effects he’s observing on the people and the Kingdom which stem from the raids, but in a way that makes sense for his character. This is just one example of how the narration gives the impression of the complexity (and sometimes violence) of Fitz’s world, but does not unnaturally bend his character to direct the story towards it, nor does it shy away when appropriate.

A great start to the series, I'm ready to read the next one. 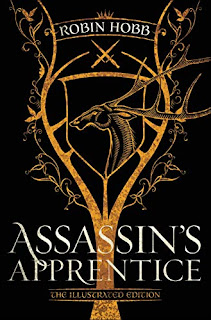