Isabel, once known as Wasp, has become leader of the fearsome upstarts, the teen girl acolytes who are adjusting to a new way of life after the overthrow of the sadistic Catchkeep-priest. They live in an uneasy alliance with the town of Sweetwater--an alliance that will be tested to its limits by the dual threats of ruthless raiders from the Waste and a deadly force from the Before-time that awaits in long-hidden tunnels.

Years ago Isabel befriended a nameless ghost, a supersoldier from the Before-time with incredible powers even after death, and their adventure together in the underworld gave her the strength and knowledge to change the brutal existence of the Catchkeep acolytes for the better. To save Sweetwater, Isabel will have to unlock the secrets of the twisted experimental program from centuries gone by that created the supersoldier and killed his friends: the Latchkey Project.

There’s a relentless sense of movement, as Isabel describes what’s she’s seeing, thinking, and doing in a constant stream. This creates a self-reinforcing interplay between Isabel's physical journey as she's exploring, and her ruminations on what's working, what's not working, what different ghosts are doing, and what any of it means.

The worldbuilding is great, building on what was established in ARCHIVIST WASP but exploring a whole new setting that was inaccessible/unknown before. There’s a sense of what places mean to her and what they prompt her to think, mingled with more detailed descriptions of specific important features of the location. It gives the whole thing a hazy, dreamlike feeling, in the way that the dreamer wakes up knowing some weirdly important and oddly-specific detail, but everything else is a vague blur that quickly falls away. This is not unlike how the ghosts must feel, perhaps. There's a lot of focus on memory and identity, and it prompted me to think on how much the absence or presence of memories contributes to personality. For these ghosts, some of them have very strong personalities even when their memories are inaccessible, but they're distressed when they become aware of the fact that they're missing memories. This creates a feeling of seeking something they might not even be able to recognize when they find it, viewed through Isabel's distress since she's seen some of what they can't remember anymore.

Since (unlike FIREBREAK) this is a direct sequel to ARCHIVIST WASP, it’s time for the sequel check. This wraps up several things left hanging from the previous book. The main storyline starts here and wasn’t present previously. The main character changed her name-in-use but is still the same person with a consistent narrative style that’s recognizable from the first book. Several major things are introduced and resolved, it definitely has its own story. It’s the last book chronologically, for now, since FIREBREAK (published later) is more of a prequel that can be read on its own. It leaves a lot of unanswered questions about the ghost, a few of which are answered by the prequel, but none of which are essential for this particular story. I think it might make sense if someone started here and hadn’t read the other books, since the social shape of the world is much changed from ARCHIVIST WASP, and the way those changes are explained can easily serve as an introduction for anyone new. A lot of the emotional resolution will definitely matter more for anyone who read the first book, but the story is pretty self-contained and would likely make enough sense to be enjoyable on its own.

I love the ending, it’s bittersweet and hopeful, hinting just enough at catharsis that it’s satisfying as an ending while being open enough to possibly support more stories afterwards. I want more with these characters, so I hope that happens. 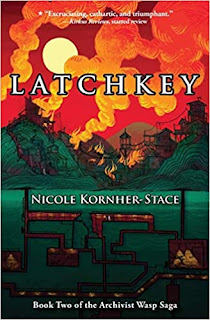