Our Violent Ends by Chloe Gong (These Violent Delights #2)

The year is 1927, and Shanghai teeters on the edge of revolution.

After sacrificing her relationship with Roma to protect him from the blood feud, Juliette has been a girl on the warpath. One wrong move, and her cousin will step in to usurp her place as the Scarlet Gang’s heir. The only way to save the boy she loves from the wrath of the Scarlets is to have him want her dead for murdering his best friend in cold blood. If Juliette were actually guilty of the crime Roma believes she committed, his rejection might sting less.

Roma is still reeling from Marshall’s death, and his cousin Benedikt will barely speak to him. Roma knows it’s his fault for letting the ruthless Juliette back into his life, and he’s determined to set things right—even if that means killing the girl he hates and loves with equal measure.

Then a new monstrous danger emerges in the city, and though secrets keep them apart, Juliette must secure Roma’s cooperation if they are to end this threat once and for all. Shanghai is already at a boiling point: The Nationalists are marching in, whispers of civil war brew louder every day, and gangster rule faces complete annihilation. Roma and Juliette must put aside their differences to combat monsters and politics, but they aren’t prepared for the biggest threat of all: protecting their hearts from each other.

OUR VIOLENT ENDS is a great finish to an excellent duology, with just the right amount of angst and catharsis. If you read THESE VIOLENT DELIGHTS and wanted more of Juliet and Roma treating stabbing and bullets as expressions of fraught teenage love in the midst of a plague-turned-takeover, you should read this ASAP.

The worldbuilding is consistent with the previous book, but it's now slowing down to build as many non-human parts of the setting as THESE VIOLENT DELIGHTS was able to. Juliet sometimes still wears flapper dresses, and Roma has a Meaningful Wardrobe Change, but tensions are high and there's just less time for fun. Plenty of time for emotionally fraught pining and hatred, especially coming off of events from the last book.

I love how much Kathleen shines in this one, she has a much better sense of herself and what place she wants to hold. Alisa, too, gets more of a role and it's very nice to see. Ben and Marsh are fantastic, I'm so happy about their arc here.

This wraps up a bunch of things from THESE VIOLENT DELIGHTS. It has a couple of storylines which start here and weren't present before, but since this is part two of a duology that's somewhat limited, as it exists to complete the story. I'm not sure if any major things were both introduced and resolved here, as generally the groundwork was laid previously even if the very specific story thread is mostly contained to this volume. It feels finished, except in as much as the ending intentionally left things open, e.g. living characters are implied to have plans for what they'll do next. The main characters are the same, with a similar ratio of how many chapters each one narrates. Their voices are distinct from each other but consistent with their styles of narration from THESE VIOLENT DELIGHTS. This might make some sense if someone picked it up at random and didn't know about the series (especially if they're familiar with ROMEO AND JULIETTE. The relevant backstory is succinctly and precisely conveyed in a way that makes it pretty easy to get up to speed, but certain character motivations and present circumstances will be confusing if someone tries to begin here, in part two of two. It does hit the sweet spot for enough of a reminder for readers who waited a while after reading the first book, at least as far as I'm concerned.

Well-done with an ending I'm still thinking about, make sure to check out OUR VIOLENT ENDS. 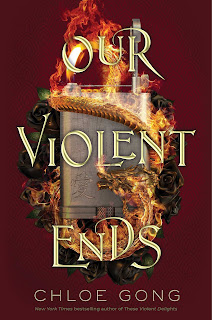