After the climate wars, a floating city is constructed in the Arctic Circle, a remarkable feat of mechanical and social engineering, complete with geothermal heating and sustainable energy. The city's denizens have become accustomed to a roughshod new way of living, however, the city is starting to fray along the edges--crime and corruption have set in, the contradictions of incredible wealth alongside direst poverty are spawning unrest, and a new disease called "the breaks" is ravaging the population.

When a strange new visitor arrives--a woman riding an orca, with a polar bear at her side--the city is entranced. The "orcamancer," as she's known, very subtly brings together four people--each living on the periphery--to stage unprecedented acts of resistance. By banding together to save their city before it crumbles under the weight of its own decay, they will learn shocking truths about themselves.

BLACKFISH CITY feels like post-apocalyptic cyberpunk (or maybe seapunk?), where it's been long enough after the destruction of significant portions of civilization that people have had time to rebuild, but nothing is as it was, and even less is as people would wish it to be.

The worldbuilding is great, with a backstory for the place itself which is told gradually throughout the narrative. There's an A.I. running everything, actually there are a lot of A.I.'s running things, and things are going about as well as they can when somebody a while ago built a nearly unaccountable system, put it on autopilot, and stopped claiming any active responsibility (i.e. badly). There are housing issues, xenophobia, immigration, and an illness spreading through the city that the authorities will neither acknowledge nor treat, but it's definitely present. Suddenly a woman shows up with an orca and a polar bear and her presence consumes the city in totally believable way. All of this is told through a rotation of protagonists from different circumstances who are seemingly unconnected. It's an interesting idea fleshed out into an excellent setting in which to place the characters. That's where it starts getting strange for me. The mysterious orcamancer woman was fascinating... until we actually meet her. Soq was really cool and made a ton of sense, with clear goals and understandable motivations... until they find out some of their personal history and start having unexplained goals that seemed to come out of nowhere. I'm not upset that the seemingly unconnected narrators turned out to actually be connected, that's a common trope which helps the narrative hang together so that they interact with the plot. That being said, I wasn't expecting them to be quite so connected. It took something that felt big and epic, people coming together as strangers to do something for the city and each other, and turned it into something much more dense and coincidental. Neither is bad, necessarily, but it meant I spent 70%-80% of the time thinking I was reading one kind of story before it suddenly changed to the other. Rather than feeling intimate it suddenly felt petty, at least for me.

There’s a moment where Soq, the nonbinary character, is implied to be intersex, but it’s conveyed briefly in a scene where a sexual partner is confused by their genitals (not described). Up until that scene they’d been pretty effortlessly and adeptly handled as a nonbinary character (with little explanatory moments but nothing that took me out of a scene), and then this encounter happens. Being intersex, if that’s what was meant, is distinct from being nonbinary. While it’s more than possible for someone to be both, it felt like their evidently intersex anatomy was offered as an explanation for their nonbinary identity in a way that was frustrating to read. They push back against the comment and correct the person, but it didn’t need to be in the story, just a bit of pointless interphobia. 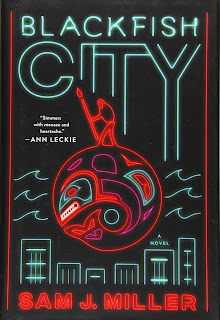