With his companion and bodyguard, Brand, he questions Addam's relatives and business contacts through the highest ranks of the nobles of New Atlantis. But as they investigate, they uncover more than a missing man: a legendary creature connected to the secret of the massacre of Rune's Court.

In looking for Addam, can Rune find the truth behind his family's death and the torments of his past?

THE LAST SUN was all wrong for me. I like witty banter and political machinations, but it felt like the interactions were constantly being explained. I made it halfway through and never felt like the protagonists were actually in any danger. There’s a tragic backstory that’s just hinted at so far, and a bodyguarding mission where they’ve just left their charge at home while they take care of other plot stuff. For all Rune talks about his lack of power, it hasn’t actually inconvenienced him or kept him from getting something done. When the seer told him to take a set of actions, he followed the advice and then everything was fine.

The tension doesn’t feel tense and I don’t like the characters enough to care whether they succeed. It’s a shame because I loved the initial problem that Mathias presents, I just wish the story was doing more with him.

It definitely doesn’t help that a bunch of the worldbuilding is themed around the Tarot, a topic with which I’m only passably familiar. If you’d like a fast-paced fantasy story with magic and guns in New Atlantis that’s themed around Tarot, give this a try. It’s just not my thing.

I’m starting to identify a particular kind of book I keep not finishing. These books seem at first like I’ll love them because I love urban fantasy, but they’re not actually urban fantasy (or at least not in the way I like). They’re fantasy set in a strange blend between some magical dimension and the modern world, with main characters who know about rent and USB drives even though the story itself will spend the briefest possible time in the mundane world, if it sets foot there at all. This was part of what I didn’t like about THE WITCH KING and A DARK AND HOLLOW STAR, and it’s some of why I stopped partway through THE LAST SUN. I prefer urban fantasy books where the modern world has magic in it and that changes how the characters interact, settings where simply deciding to ignore mundane humans is a choice with weight that affects the story. This just isn't what I want, so I stopped. 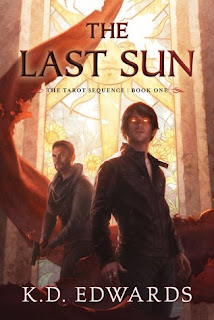