A gruesome curse. A city in upheaval. A monster with unquenchable appetites.

As the last true witches living in a city shifting from magic to industry, Marlinchen and her two sisters are little more than tourist traps as they treat their clients with archaic remedies and beguile them with nostalgic charm. Marlinchen spends her days divining secrets in exchange for rubles and trying to placate their tyrannical, xenophobic wizard father, who keeps his daughters sequestered from the outside world. While at night, she and her sisters sneak out to enjoy the city's amenities and revel in its thrills, particularly the recently established ballet theatre, where Marlinchen meets a dancer who quickly captures her heart.

But as Marlinchen's late-night trysts grow more fervent and frequent, so does the threat of her father's rage and magic. And while the city flourishes with culture and bustles with enterprise, a monster lurks in its midst, borne of intolerance and resentment and suffused with old-world power. Caught between history and progress and blood and desire, Marlinchen must draw upon her own magic to keep her city safe and find her place within it.

This retelling of The Juniper Tree uses that story's themes of murder, cannibalism, and child abuse, updating it into a tale of reclamation and monstrosity.

JUNIPER &THORN is a story built on a complicated tangle of self harm and exploration as Marlinchen, now a young woman, finally starts to defy her controlling father’s dictates. Especially early on, she has a variety of maladaptive behaviors including but not limited to self harm, disordered eating, and intrusive thoughts (ranging from negative self-talk to hypersexual fantasies). These are symptoms of and reactions to the ongoing all-pervasive abusive atmosphere which consumed her childhood and is set to rob her of normal adulthood as well. She and her sisters live in fear of their father, but as he’s made himself the only allowable source of affection in their lives they are desperate to retain his favor. As he’s also a wizard he’s threatened their bodies and lives if they disobey him, and can back up his threats with intimations of what happened to their mother before them. He controls their sexuality through threats and intimidation, as well as by using magical means to check whether they’re still “pure”, something which doesn’t stop Marlinchen from masturbating but makes her worried about how she goes about it.

Marlinchen is gaslit and abused by her father, and has toxic (often abusive) relationships with her sisters. The way that she’s constantly made to question her own perceptions but is also the narrator sometimes makes it hard to tell what things were supposed to be bad, or what things are stressful while not abusive. This had this overall effect that for the first half of the book I felt increasingly unmoored, hoping to find some part of her life that was actually okay and increasingly coming to the conclusion that this is a horror story and there’s not much that’s meant to be going well.

Marlinchen's relationships with her sisters is contentious. They're all trying to maintain access to the extremely finite resource which is their father's goodwill, but they have different ways of measuring whether they've achieved it. Marlinchen's yardstick seems to be whether his abuse stays verbal instead of escalating, which is a depressingly low baseline. There’s a pivotal scene midway through where the tactics in their father’s abuse have taken a sudden turn, and Marlinchen has a confrontation with Undine where in her exasperation Undine says things that explain her own survival strategy, and the flaw she sees in Marlinchen’s. This prompts Marlinchen to realize that she has options she never considered, and that perhaps her sisters have been employing completely different strategies with very different aims from herself.

Some little linguistic touches place this in the same world as THE WOLF AND THE WOODSMAN. I'm sure if I go back to re-read the other book I'll notice more things, but I noticed enough to be sure even before looking it up to see that I was correct. Because Marlinchen is only able to visit a few locations, there's a lot of detail about the house but less about other places within the city. This means that most of the information about the city and their place in it is gradually told as it relates to how her father feels about it (generally, how he hates it and why). This makes for a (plot-appropriate) gloomy mood.

The plot is well-constructed and engaging. It created a slowly-building feeling of dread which fit the story and was very stressful. The ending made a bunch of early inconsistencies have an explanation beyond "fairy tale logic", and I'm very satisfied with how things ended. 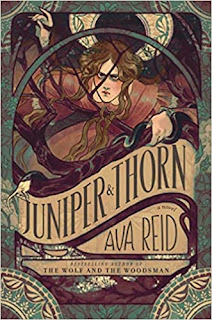