Angel of the Overpass by Seanan McGuire (Ghost Roads #3)

Lady of shadows, keeper of changes, plant the seeds of faith within me, that I might grow and flourish, that I might find my way through danger and uncertainty to the safety of your garden. Let my roots grow strong and my skin grow thick, that I might stand fast against all who would destroy me. Grant to me your favor, grant to me your grace, and when my time is done, grant to me the wisdom to lay my burdens down and rest beside you, one more flower in a sea of blooms, where nothing shall ever trouble me again.

Rose Marshall died when she was sixteen years old and on her way to her high school prom. She hasn't been resting easy since then--Bobby Cross, the man who killed her, got away clean after running her off the road, and she's not the kind of girl who can let something like that slide. She's been looking for a way to stop him since before they put her body in the ground.

But things have changed in the twilight world where the spirits of the restless dead continue their "lives." The crossroads have been destroyed, and Bobby's protections are gone. For the first time, it might be possible for Rose to defeat him.

Not alone, though. She'll need every friend she's managed to make and every favor she's managed to add to her account if she wants to stand a chance...and this may be her last chance to be avenged, since what is Bobby Cross without the crossroads?

Everything Rose knows is about to change.

In ANGEL OF THE OVERPASS, Rose reckons with what has happened in the Twilight and beyond thanks to certain actions taken in the Incryptid novel, THAT AIN’T WITCHCRAFT. As a side note, if you’ve been reading the Ghost Roads without reading Incryptid then I recommend fixing that if possible since the two series are related and these two books in particular intertwine them irrevocably.

Rose has been dead since she was sixteen, and her years of hitching have kept her moving. The Ghost Roads series, generally, has the time to do a lot of worldbuilding from a different but complementary view to the Incryptid books. It focuses on routewitches, ghosts, and occasionally deities, where Incryptid focuses on the Price-Healy lineage/antics and cryptids (which are sometimes the same thing).

Not only does this wrap up a big thing left hanging from the start of the series, but it also addresses the after effects of some events in the related Incryptid books by the same author. Specifically, it deals with particular aspects of the fallout from THAT AIN’T WITCHCRAFT. It has a storyline that’s distinct from the previous books while being intimately connected to them. I’m not sure that it both introduces and resolves anything big, since a lot of what’s it’s doing is processing and mitigating changes to the world which happened in another book, as well as dealing with the main antagonist of the series. It has a lot of resolution, but many fewer introductions.

Time will tell whether this is the end of a trilogy or if there will be more books in the series, given how it ends I suspect the latter. Assuming it’s not the last book, it sets up a pretty major development which can easily be expanded on later. It’s the end of a specific phase for Rose and the beginning of another, and I hope future books show that new phase playing out.

Rose is still the narrator and her voice is consistent with previous books, as well as her sporadic appearances in Incryptid. It wouldn’t make sense to start here, but weirdly the previous Ghost Roads books aren’t the most important precedent. In some ways, ANGEL OF THE OVERPASS is a more immediate follow-up to THAT AIN’T WITCHCRAFT than the direct Incryptid sequel, IMAGINARY NUMBERS. It relies on the first two Ghost Roads books for some things, but if someone has only been reading Incryptid they should still read ANGEL OF THE OVERPASS to answer some pretty big worldbuilding questions even if they don’t intend to catch up with the rest of the series proper.

The plot follows Rose trying to track down Bobby Cross now that some *events* mean she has a chance at dealing with him once and for all. Unfortunately (or perhaps fortunately?) following path to its conclusion will change her in ways she might not be ready for. Really, she’s been changing all along and what she does now will either finalize or disrupt a transformation that’s been a long time coming. I’m glad for the canonicity of this change, since more and more her circumstances have made it harder for her to be a hitcher, including but not limited to her having a car/boyfriend such that she only needs rides as a condition of her ghost-hood, the logistics of that have been getting trickier.

This is a great entry in the Ghost Roads and I’m looking forward to the next time Rose appears, whether in this series or another. 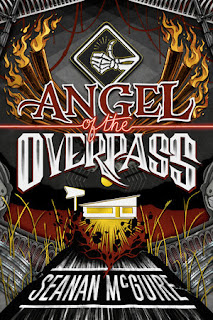