Do you ever hear noises when you lay quietly in your bed at night, and when you ask your parents what it was they say it's the house settling. Well, if you're a true believer you'll know it's the series of Cirque Du Freak coming to life.

These books are about a young boy named Darren who makes a mistake that doesn't get him grounded, but dead. Well, undead technically. He was bitten by a vampire and is cursed to wonder the night, while being a vampire assistant. He is a half vampire himself and must follow the lead of his master, Mr. Crepsley, as they feed on the blood of our family and friends. They must worry of the sun and their evil vampeneze cousins who broke away from them hundreds of years ago. Darren and Mr.Crepsley will clash with vicious werewolves, travel through dim murky sewers, and climb treacherous mountains, which are infested with abnormal beings. Friendship, grief, and anguish are all heaved into these books. However, in the end only Darren will be able to decide his fate, human, or vampire. These books are recommended to all the children of the night, and it is guaranteed that Darren Shawn will have you on the edge of your coffin and wearing a scarf by the end of this bloodthirsty series. So readers beware, because you're in for a scare.

CIRQUE DU FREAK: A LIVING NIGHTMARE is the story of how Darren coveted a spider, met a vampire, and found himself in over his head.

Darren pays a lot of attention to people and what’s happening with them. He seems to have a great relationship with his sister, a pretty good (if not always honest) one with his parents, and he has a close-knit group of friends his age. His closest friend is Steve, but it seems like he puts a lot of energy into managing their interactions so Steve won’t get upset and yell at him. Because of the framing of the story we don’t see a lot of Steve’s temper, but given what he threatens and how he follows it up, I’m willing to believe this isn’t the first time he’s drastically overreacted to a slight, whether real or merely perceived. It’s a neat bit of characterization and it works very well.

Given that the entire premise revolves around a kid going to a freak show and finding out that monsters are real, I appreciated that one of the first events in the book is a teacher seeing the flyer for the show and explaining the bigoted and ableist history of them. It allows for the rest of the book to use that as a cover for what’s actually happening with the show, and lets anyone who’d rather not read a fictional version of this know up front what they’re getting into.

There’s a lot of little worldbuilding touches I love, like the descriptions of the freak show souvenirs and concessions. It completely makes sense that a kid would be fascinated by them, and it’s fun to get those descriptions as a more lighthearted moment after some of the tension immediately previous.

The plot is very much the introduction to a much bigger story. It ends on a bit of a cliffhanger, with a bunch of bad things happening and a clear next step that can’t be resolved until later. It introduced a bunch of the major players and made it mandatory/possible for Darren to leave his family so the rest of the series can happen, but if someone stopped after this book it would probably be unsatisfactory. As someone who’s read the series before, it prompts me to keep going, since I like what this previews and I’m ready for more. 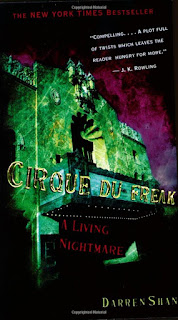