Beneath The Rising by Premee Mohamed (Beneath the Rising #1)

Nick Prasad has always enjoyed a quiet life in the shadow of his best friend, child prodigy and technological genius Joanna ‘Johnny’ Chambers. But all that is about to end.

When Johnny invents a clean reactor that could eliminate fossil fuels and change the world, she awakens primal, evil Ancient Ones set on subjugating humanity.

From the oldest library in the world to the ruins of Nineveh, hunted at every turn, they will need to trust each other completely to survive…

BENEATH THE RISING features the unhealthy friendship of two teens in a bizarrely stable equilibrium which is maintained by neither of them thinking about it too hard and rarely having actual conversations about the way their edges cut. Johnny needs Nicky’s help to stop the tentacle monsters/gods from breaking into this dimensions and rending the world, but as they race across the globe Nicky finds himself less and less sure that she actually needs his help, and increasingly convinced that he’s just there as her porter. It doesn’t help that the monsters keep crashing into his dreams to try and make a deal.

I liked the second half much more than the first, but if you find yourself disliking Nick as a narrator you should know it only intensifies. I read the entire thing despite not liking either of them as characters, since it felt like more was going on than was immediately obvious.

The opening paragraph establishes the timeframe and the split from real-world history with a brevity and deftness which is, quite frankly, stunning. The prose is fluid, conveying Nicky’s understanding of the world and the beings in it in a way that gives his perspective without getting in the way. Terror lies in the gaps when words fail him, as the monsters rise and the world grows ever stranger. It’s fast-paced and driven by the urgency of fear, with just enough answers available at each stage to temporarily hold back Nicky’s confusion in the face of Johnny’s need to hoard information. Some later sections started to feel like they were trying to be both a brief  tour of various MENA and Middle Eastern locations as well as focusing on the dynamic between Nicky and Johnny. As you may gather from the rest of this review, there wasn’t really room to accomplish both, and so I was left with a blurry impression of Nick’s surprise as a first-time traveler.

The story revolves around the relationship between Nicky and Johnny. The specific plot events of monsters appearing, endless travel, occasional difficulties with authorities, and uneasy alliances with prior acquaintances of Johnny’s all serve to intensify and flavor Nicky’s endless thoughts of his past, how he and Johnny are in relation to each other, and whether he feels useful or just used.

Nicky seems unable to understand that Johnny will never be interested, he’s holding on to just enough hope that he torments himself with little thoughts of how some small casual or platonically intimate word or action has a romantic parallel. It’s just enough to read like a character trait without rising to the level of being grating, since he doesn’t use these hopes against Johnny. They’re little things, like thinking how them using the same chapstick one after another is “the closest we’d ever come to a kiss.” To whatever degree he understands his position of “needed but not romantically loved” by Johnny, he’s unwilling or unable to have that change how he feels about her. He has stuck around for years even though he wants something she will not or cannot reciprocate, and she has a privileged life that means their every moment of existence widens the gulf between their experiences. There's a very specific reason for this with a pretty good payoff, but it was a bit grating before it was explained.

Nick is a poor brown boy and Johnny is a rich white girl, they’re bonded together now through years of time spent as friends, but it originally started when they were present as children for a violent event which Nicky now only dimly remembers. Nicky is the point-of-view character, on the outside looking in as Johnny is a super-genius who never says she thinks of him as lesser but he keeps feeling the gulfs between their experiences of the world. They’re both deeply flawed, with separate competencies and gaps in their knowledge, complementing each other in a way that means they’re both constantly a bit frustrated once the fate of the world hangs on Nicky helping Johnny be a genius one more time. It’s a blend which was at times frustrating to read but mostly feels like an endless dance, a catch-and-release as Nicky slowly starts to realize that his genius friend isn’t perfect, and the lens of his regard of her and the new places she drags him into shows the gaps in his own understanding. It’s entertaining to read, shot through with moments of fear and dread as the consequences of years of Johnny’s actions start to have costs in the present. As the stakes get higher and they both begin panicking (for very excellent plot reasons), their rapport cracks more and more and they stop consistently covering for each other’s frailties, sometimes digging in on what they know for sure and what the other person couldn’t possibly understand. 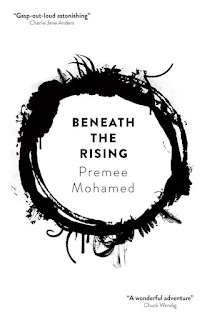