Portrait of a Thief by Grace D. Li

This was how things began: Boston on the cusp of fall, the Sackler Museum robbed of 23 pieces of priceless Chinese art. Even in this back room, dust catching the slant of golden, late-afternoon light, Will could hear the sirens. They sounded like a promise.

Will Chen, a Chinese American art history student at Harvard, has spent most of his life learning about the West - its art, its culture, all that it has taken and called its own. He believes art belongs with its creators, so when a Chinese corporation offers him a (highly illegal) chance to reclaim five priceless sculptures, it's surprisingly easy to say yes.

Will's crew, fellow students chosen out of his boundless optimism for their skills and loyalty, aren't exactly experienced criminals. Irene is a public policy major at Duke who can talk her way out of anything; Daniel is pre-med with steady hands and dreams of being a surgeon. Lily is an engineering student who races cars in her spare time; and Will is relying on Alex, an MIT dropout turned software engineer, to hack her way in and out of each museum they must rob.

Each student has their own complicated relationship with China and the identities they've cultivated as Chinese Americans, but one thing soon becomes certain: they won't say no.

Because if they succeed? They earn an unfathomable ten million each, and a chance to make history. If they fail, they lose everything . . . and the West wins again.

PORTRAIT OF A THIEF is engrossing from the first page, featuring five young Chinese Americans hired to steal back Chinese art in Western museums. If you've been looking for a character-driven heist novel, don't miss this one.

The tone is generally contemplative, as the motivations for every move are just as important as the action itself. Occasionally the narrative plays around with time as one chapter might actually take place before the chapter it followed in the book. It’s clear when this happens. It’s used just often enough to be a feature of the storytelling, while being infrequent so that the book is linear overall.

Will is the logistical center of the group since he was the one hired to make the heist happen, but all five of the main characters have similar importance in the narrative. The style of rotating third-person narrators mean that not only do we get what each character thinks as the story progresses, but also we get what they think about each other in various combinations and circumstances. Will chose this crew, and so they all know him while having various levels of connection (or even no connection at first) to everyone else. Irene is his sister, Lily is her friend, Alex and Will briefly dated, and Daniel is Will’s friend. Just as important (or perhaps more) than these interpersonal connections is each of their relationships with China and their identities as Chinese Americans.

The worldbuilding is gradual, beginning with enough information to establish an approximate decade, then eventually dialing in on a one-to-two-year range for its start. Where it shines is in the complicated web of feelings that each person has about their positionality with regards to the United States and China, what that looks like and what it means for them individually and in relation to their families. Whether they think of themselves as Chinese Americans, as Americans, as Chinese, or some more nuanced blend of these... all of that combines to affect how they move through the world and, importantly for this heist story, how they move through Western museums holding (looted/stolen) Chinese artifacts and art.

I enjoyed the heists, but at times the actual heists are secondary to the process of each of the crew figuring out their feeling about themselves and each other. Even the attempt is transformational, and I love how the overall aim of the heists is handled. 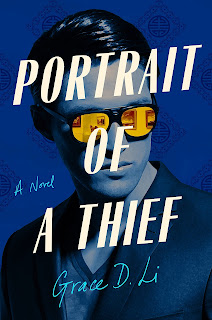