The premise of WE UNLEASH THE MERCILESS STORM spoils several end-of-book events for WE SET THE DARK ON FIRE. Please proceed with caution as spoilers for the first book are unmarked.

Being a part of the resistance group La Voz is an act of devotion and desperation. On the other side of Medio’s border wall, the oppressed class fights for freedom and liberty, sacrificing what little they have to become defenders of the cause.

Carmen Santos is one of La Voz’s best soldiers. She spent years undercover, but now, with her identity exposed and the island on the brink of a civil war, Carmen returns to the only real home she’s ever known: La Voz’s headquarters.

There she must reckon with her beloved leader, who is under the influence of an aggressive new recruit, and with the devastating news that her true love might be the target of an assassination plot. Will Carmen break with her community and save the girl who stole her heart—or fully embrace the ruthless rebel she was always meant to be?

WE UNLEASH THE MERCILESS STORM picks up right where WE SET THE DARK ON FIRE left off, right after violence and revelations but from Carmen's perspective instead of Dani's. Read this for a character-driven story of love during danger and revolution.

The tone is immediately grimmer than the first book. Dani’s arc was one of hope and disillusionment in difficult circumstances, where Carmen’s begins in the wake of terror and betrayal with things going from bad to worse.

Carmen has two non-blood siblings who were around in the first book but this time around the narration includes Carmen's warm impressions of them. Her dynamic with Alex is fraught right now because she doesn't trust Carmen's loyalties after how close she got to Dani. Sota is more matter-of-fact and even more secretive than Alex. Speaking of Dani, Carmen starts off having no idea where she stands with Dani or whether she's cemented her loyalty with their husband since losing contact with the rebels.

WE SET THE DARK ON FIRE had a lot of worldbuilding to do and WE UNLEASH THE MERCILESS STORM uses it but doesn't add much to it in a grand sense. It adds more parts of the island, including the camp for La Voz, but other than the fact that there is a class divide it doesn't do much explaining of anything already covered in the first one. The overall effect is to treat this as the second half of one giant book rather than leaving space for someone who needs reminders since reading the first book. This is a duology, so that's fine, but this is best read as close to immediately after the first book as you can manage for the ideal experience.

The whole purpose of this book is to address things left hanging from the first book, like Carmen's sudden revelation and their entire relationship, for a start. Carmen is a different person than Dani and this book is about her troubles and goals which means there is a new storyline and some new things which are introduced and resolved. As far as I can tell this is a duology which is completed by this book. While there could maybe be more books in this setting, Dani and Carmen's story seems complete with a lot of things wrapped up. In a bigger sense I'd like to know what they do next and how the rebellion turns out in the long run, but it's closed enough to be the end.

Carmen is the new narrator and her voice is distinct from Dani's. She has a pretty different background from Dani (even at the school they received different training) and pays attention to completely different things. This picks up exactly where the last book left off, but from a different character’s perspective. This wouldn’t make sense to start here without reading the first book.

Even more so than the first book, the plot revolves around Carmen and Dani's relationship. This first thing is Carmen has to figure out how to get to Dani to see if they even still have a relationship, and the story proceeds from there. The story keeps moving and I like how it ends up, this is a good finish to the story and I'm satisfied with it overall. 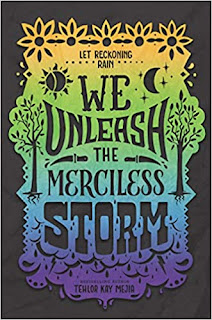