The Graveyard Book by Neil Gaiman

Bod is an unusual boy who inhabits an unusual place--he's the only living resident of a graveyard. Raised from infancy by the ghosts, werewolves, and other cemetery denizens, Bod has learned the antiquated customs of his guardians' time as well as their ghostly teachings--such as the ability to Fade so mere mortals cannot see him.

Can a boy raised by ghosts face the wonders and terrors of the worlds of both the living and the dead?

Nobody Owens ("Bod") is raised by the denizens of a graveyard after the rest of his family is killed when he's a baby.

Bod grows from a baby into a teenager over the course of the book, and he feels distinct at each age in how he interacts with the world and what kinds of questions he asks. His world is built from his relationships with the others in the graveyard, whether they're consistent visitors or permanent residents. It's also shaped by his attempts to be around living people, most of which go poorly and all of which are complicated. Because Bod’s perspective is the main (but not quite only) one in the book, his understanding is the filter for most of the worldbuilding. There are things he’s told but lacks additional context to understand, and some things he knows intimately but which are just mentioned.

The first two-thirds of the book is a series of vignettes of events which happened to Bod as he grows up. The episodic pacing culminates in one major event which comprises the final third of the book and is built on everything that happened until this point. It makes this large section feel important, tense, and distinct from the other sections while complementing them perfectly. 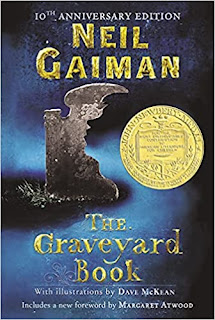