When Amaya rescues a mysterious stranger from drowning, she fears her rash actions have earned her a longer sentence on the debtor ship where she’s been held captive for years. Instead, the man she saved offers her unimaginable riches and a new identity, setting Amaya on a perilous course through the coastal city-state of Moray, where old-world opulence and desperate gamblers collide.

Amaya wants one thing: revenge against the man who ruined her family and stole the life she once had. But the more entangled she becomes in this game of deception—and as her path intertwines with the son of the man she’s plotting to bring down—the more she uncovers about the truth of her past. And the more she realizes she must trust no one…

SCAVENGE THE STARS is a Count of Monte Cristo retelling which uses the source material as inspiration and a loose outline, but diverges from the plot and precise premise in way that is delightful to those who are unfamiliar with the inspiration, but delicately balances reference and surprise for those who know it well.

There are two main characters, Amaya (known early on as Silverfish), and Cayo (son of a nobleman who wronged her). Amaya is working with a man named Boon, who helped her find a fortune and offered it for her use as long as she helped him with his aims. Cayo is a recovering gambler who is trying to get back in his father's good graces after losing a large portion of the family fortune to games of chance.

Amaya and Cayo's sections have distinct narrative voices and it was pretty easy to track what was going on. There are some well-laid surprises in the structure of the chapters, especially for someone like myself who has read The Count of Monte Cristo (or someone who has seen one of the movie versions).

The repeated missteps as Cayo and the Countess kept assuming things about each other's actions worked well and made a lot of sense in context. They never built enough to be extremely stressful for me when reading, but they were a completely understandable level of small but well-intentioned miscommunications which would result from these characters getting to know each other when they haven't yet put all their cards on the table.

The worldbuilding is pretty good, it feels like there's a lot of political ground laid that will pay off in the sequel. At times the asides discussing politics with other countries felt a bit distracting because they mostly didn't go anywhere until the very end. None of the characters (so far) were at a level to affect international politics, and while their actions gradually built so it might be possible in RAVAGE THE DARK, it made it harder to know what details mattered to the main plot. I like the handling of the quarantine and plague, there's an excellent payoff for it, as well as ongoing impacts to the main characters.

This was good overall and I'm looking forward to reading RAVAGE THE DARK. I'm happy to read a retelling which had room to surprise me with its plot, using the bones of one of my favorite books in a new way. 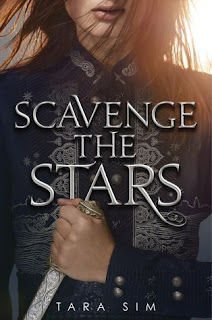