The Doomsday Book of Fairy Tales by Emily Brewes

An astounding tale of a dangerous quest, a talking dog, and fragmented fairy tales in an eerie post-climate collapse future.

A long time ago, the Vanderchucks fled the growing climate disaster and followed their neighbours into the Underground. Jesse Vanderchuck thought it was the end. Of the world. Of life. Eventually, Jesse’s little sister, Olivia, ran away and Jesse started picking through trash heaps in Toronto’s abandoned subway tunnels. Day in, day out.

Now, years later, Jesse meets a talking dog. Fighting illness and the hostile world aboveground, Jesse and Doggo embark on a fool’s errand to find Olivia — or die trying. Along the way, Jesse spins a series of fairy tales from threads of memories, weaving together the past, present, and future into stories of brave girls, of cunning lads, of love in the face of wickedness, and of hope in the midst of despair.

THE DOOMSDAY BOOK OF FAIRY TALES weaves hope, heartbreak, and delusion into a compelling story of surviving past any chance of thriving. The world has ended but humanity hasn’t stopped, and Jesse will spin stories for as long as there’s anyone to hear them (perhaps even when there’s not).

Jesse is a skilled narrator, but an unreliable one. The fables woven into the descriptions of her life are excellent stories in their own right, and they are so numerous as to blur the line between whether this is a character telling stories or a short story collection with a very involved framing device. As her life becomes bleaker and more stressful the stories come faster, she’s spinning them for her dog, then someone she finds in her travels, and eventually to herself (even if she can’t admit it).

Jesse needs Doggo desperately, he’s the one constant in her thoughts even when he’s not around. Jesse’s family also has a large impact on her, mostly through the shape of their absence. Her relationship with her sister wasn’t great as kids, and Jesse has a lot of tangled feelings about the slow dissolution of her family until she’s all by herself for decades.

The worldbuilding is bleak in the real world and fantastical in Jesse’s stories. They were very engaging, at one point I was so engrossed in the plot of one of the fairy tales that I swore aloud when a character made a foolish decision. Some of the stories were flimsier than others, but taken as a whole they’re great and they make the entire book stronger. Jesse is canonically making them up in the moment, so even the roughness of some of them is explained in the text.

The ending made me question everything I knew about the actual trajectory of the story, leaving open the possibility that events proceeded quite differently from what was directly said. It’s done in a way that strengthens the plot overall and it makes me want to read the whole thing again with this new theory.

I read this as an audiobook and it helped enhance the feeling of being read stories from a book of fairy tales.

**After publishing the review it was pointed out that the entire book manages to not use third-person pronouns for Jesse. My use of "she" for Jesse was definitely influenced by reading it as an audiobook, but other reviews may use different pronoun sets. 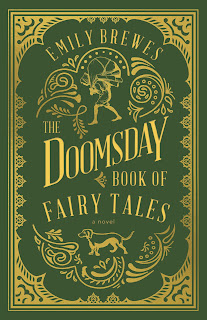