The Forever War by Joe Haldeman

The Earth's leaders have drawn a line in the interstellar sand—despite the fact that the fierce alien enemy that they would oppose is inscrutable, unconquerable, and very far away. A reluctant conscript drafted into an elite Military unit, Private William Mandella has been propelled through space and time to fight in the distant thousand-year conflict; to perform his duties without rancor and even rise up through military ranks. Pvt. Mandella is willing to do whatever it takes to survive the ordeal and return home. But "home" may be even more terrifying than battle, because, thanks to the time dilation caused by space travel, Mandella is aging months while the Earth he left behind is aging centuries.

THE FOREVER WAR is a story about a never-ending war against a barely-understood enemy, fought by soldiers who are removed from their own time and can never really come home again.

Mandella begins as just one of a hundred men and women (evenly distributed), tapped for an off-planet tour of duty. He’s casually intimate with the whole group, partly because of an assigned bedmate rotation, though he’s a bit closer with Marygay Potter by the time the story starts. The change in their level of emotional intimacy is apparent when he switches from calling her “Potter” (as he does in the beginning) to “Marygay” as he does starting from their brief return to Earth and lasting the rest of their time together. After their attempt to return to civilian life goes badly in the early 2020’s, they gradually become each other’s only connection to the 20th century, as everyone around them was born much later and in an increasingly unrecognizable society.

A large part of what makes all future iterations of human society so unrecognizable to Mandella is that, beginning in the early 21st century, a government program makes first most and then all people homosexual. As a queer person this felt unrealistic to me due to a complete lack of any idea of bisexuality or pansexuality, and the only reference to “asexuality” being in reference to a particular amputee’s physical inability rather than lack of desire (the only thing discussed is homosexuality, so I’ll refrain from attempting to list the full list of possibilities omitted). Both the overwhelming heterosexuality of his past and the mandatory homosexuality of the future are socially reinforced in a way that makes them both feel artificial. In this setting being one or the other is as simple as flipping some switch, and yet most people prefer to stay on their original setting. However, within the story the point isn’t whether it correctly projected the future direction of queerness. It is rather that when Mandella, a heterosexual protagonist, is already ripped away from his society through the dilated progression of relative time, the gradual switch to having him completely surrounded by gay people even when he’s deployed means that he went from the enforced intimacy of assigned bedmates to a frustrating lack of intimacy and connection. The only person capable of understanding him is his fellow 20th-century lover, Marygay. Mandella’s speech is antiquated, he has no common cultural touchstones, and even the intimacy of touch is unavailable because the women he’d possibly be interested in are all uninterested in him, and he is neither willing nor able to accept other avenues of connection. The past is a foreign country, but unfortunately it’s the only one he knows. 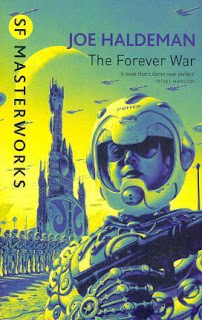