Ambassador Mahit Dzmare arrives in the center of the multi-system Teixcalaanli Empire only to discover that her predecessor, the previous ambassador from their small but fiercely independent mining Station, has died. But no one will admit that his death wasn't an accident—or that Mahit might be next to die, during a time of political instability in the highest echelons of the imperial court.

Now, Mahit must discover who is behind the murder, rescue herself, and save her Station from Teixcalaan's unceasing expansion—all while navigating an alien culture that is all too seductive, engaging in intrigues of her own, and hiding a deadly technological secret—one that might spell the end of her Station and her way of life—or rescue it from annihilation.

A MEMORY CALLED EMPIRE is a political drama sparked by a murder mystery which asks whether the safety of secrecy is worth its weight in blood.

Mahit is the main character but she's not only herself (at least, that's the plan). She's supposed to have a technologically-enabled memory of her predecessor, Yskandr, the most recent ambassador to Texicalaan. It's fifteen years out of date but she's making do until a plot thing happens and she's alone in her head for much of the narrative. As an ambassador she's trying to make choices which will preserve her people's way of life, but increasingly she finds that her predecessor may have had different aims and made other promises.

Mahit forms her own connections (especially but not only with Three Seagrass), but she also has to contend with the remnants of relationships formed by Yskandr. His death is the catalyst for her arrival, but she doesn't know what promises he made (or broke). I enjoyed the webs of politics so much partly because Three Seagrass and Mahit are able to communicate well about the structure of what certain moves matter. I love the rapport between Three Seagrass and Twelve Azalea, beginning with but not limited to their nicknames for each other ("Reed" and "Petal", respectively).

The worldbuilding is excellent, colored with small details about ordinary objects and spaces, specifically how Mahit relates to them. Mahit's outsider status provides ample opportunity for in-universe explanations, but her training before arriving in Teixcalaan means that she doesn't need explanations for the simple stuff which would bog down the narrative even if a genuinely new visitor might benefit from the tutorial. Much of the active worldbuilding is through discussions about language and culture, filtering other characters' explanations and descriptions through Mahit's background as a Stationer. I particularly enjoyed the ways that foods are described, since generally I recognize the foods, but her way of describing them excellently conveyed what they are even though she didn't have the terms or the specific cultural context in Teixcalaan.

The plot centers around a murder mystery of sorts and the politics of imperial succession. It's emboldened and complicated by the aims of an empire whose people think of themselves as the only ones who matter, and their uncertain language around describing others while still letting their very words recognize humans outside Teixcalaan as people. I enjoyed the mystery, the "murder" portion of the mystery is just one part of a very fascinating whole. Mahit and Three Seagrass are players in an ongoing conversation about what it means to be a person, and how the language one uses changes the thoughts they'll have. This plays out gradually, where the discussion is given room to breathe amidst the more hectic parts of the plot.

I love this and I'm planning to keep reading the series, this is an excellent start and I'm eager to see where it goes. 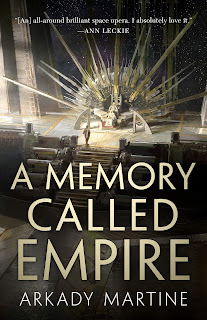