The Past Is Red by Catherynne M. Valente

The future is blue. Endless blue…except for a few small places that float across the hot, drowned world left behind by long-gone fossil fuel-guzzlers. One of those patches is a magical place called Garbagetown.

But Earth is a terrible mess, hope is a fragile thing, and a lot of people are very angry with her. Then Tetley discovers a new friend, a terrible secret, and more to her world than she ever expected.

THE PAST IS RED follows Tetley, first a child then an adult in Garbagetown, the floating raft of trash from the long-deceased Fuckwits who wrecked the planet and died long ago when the waters rose.

It's made of repurposed jargon, vibes, and fridge horror, which makes it hard to describe but excellent to read. Tetley is hated by everyone she knows at home because of something she does partway through the book. This greatly reduces the number of relationships to keep track of, but also turns every interaction into a chance for someone to hurt her and to feel justified according to the rules. Her main relationships are with Big Red and Goodnight Moon. The narrative is told out of order, which means that the effects of that one action play out through the entire story, first as foreshadowing of the event and then reflecting on it.

The worldbuilding is conveyed through a mix of direct explanations from Tetley and the strange gaps between what those things are now in reality versus what they are to her in Garbagetown. Every time she explains something there’s a dissonance between my understanding of the objects or concepts involved and what she says about them, and that dissonance fleshes out the world.

The plot was a bit hard to follow, as it bounces around between Tetley thinking to herself, actually doing things, or talking to someone about what happened. There’s a small moment towards the end which changed my understanding of a lot of sections from earlier, and another which implied the origin of a strange but important phrase. I think this will make a lot more sense when I re-read it, but I’m fine being confused for a while if the payoff is worth it. This time, it definitely is. The ending is my favorite part, with a twist in understanding that is beautiful handled. 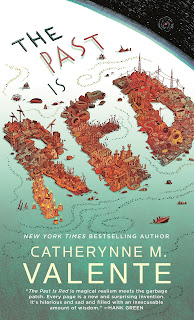