Where The Drowned Girls Go by Seanan McGuire (Wayward Children #7)

“Welcome to the Whitethorn Institute. The first step is always admitting you need help, and you’ve already taken that step by requesting a transfer into our company.”

There is another school for children who fall through doors and fall back out again. It isn’t as friendly as Eleanor West’s Home for Wayward Children.

And it isn’t as safe.

When Eleanor West decided to open her school, her sanctuary, her “Home for Wayward Children,” she knew from the beginning that there would be children she couldn’t save; when Cora decides she needs a different direction, a different fate, a different prophecy, Miss West reluctantly agrees to transfer her to the other school, where things are run very differently by Whitethorn, the Headmaster.

She will soon discover that not all doors are welcoming…

Cora can't stop hearing the Drowned Gods and wants to escape their oil-slick rainbows on her skin. She transfers to Whitethorn Academy in the hopes that it'll be better to forget, but it turns out conversion therapy for kids returned from portals doesn't work any better than the other kind.

Cora is a mermaid even if her scales aren't on the outside right now, but because of some previous events she's currently a mermaid who is having trouble being in the water. The stress of this drives her to think that being severed from both the Drowned Gods and from her Trenches-derived mermaid nature altogether might be better than having both and being haunted by nightmares. She's fat and comfortable in her own skin, the descriptions of fatphobia in the narrative are about how other people are seeing her and assuming things, and she's rejecting those assertions. Fatphobia is just one facet of the food control at Whitethorn, but it's the one she feels most keenly.

Cora doesn’t get to know the other girls very well and that feels purposeful in the narrative. No one at the school is there to bond, they’re there to forget and break in a way that fits the Academy’s version of the world. This gradually changes, especially once a new student appears and they both run into Regan (the protagonist of ACROSS THE GREEN GRASS FIELDS).

The world of Whitethorn Academy is at least partly modeled after “conversion therapy”, which is a euphemist term for the practice of emotionally and physically torturing people (usually children) until they stop exhibiting some “undesirable” behavior (specifically that of being queer). At Whitethorn, the undesirable behavior is anything having to do with the doors. There are a lot of little subtle things that I appreciate about this manner of worldbuilding, but due to what it’s copying a detailed description would likely be very triggering. The big one I will comment on is that Cora notices that almost all the faculty were former Whitethorn students, because the way in which the school breaks them makes them detached from their doors but also ill-suited for the normal world outside. There’s a lot of little things like that which make for a chilling read, forming a complete vision of a place which takes pleasure in breaking children, but told in a way that makes it clear at every moment that this is a horrible thing.

This continues Cora’s story from her appearances in previous books, as well as showing Regan who was introduced in ACROSS THE GREEN GRASS FIELDS. There's a new storyline which revolves around the continuing effects on Cora from her time spent with the Drowned Gods, and her attempt to break their hold by going to Whitethorn. A big thing is introduced and resolved, but this was just the introduction for Whitethorn Academy and I’m sure we’ll get more in the future. It set up a lot of fascinating things about that school and the contrast between their mission and Eleanor’s. Cora is a new narrator in the series and her voice is distinct from the previous ones. This book is a turning point in the series and might be a bit much for someone to try and start here. It relies in a basic understanding of the doors and why someone might want to either return or forget, so it’s definitely better to start with the first book instead. The ending is well done, with a bittersweet mix of triumph and terror. I'm very excited for whatever's next, this introduced several new characters and I'd love to see their doors. 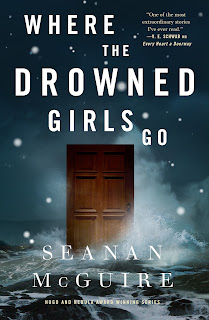