The Alchemist by Paulo Coelho

Paulo Coelho's enchanting novel has inspired a devoted following around the world. This story, dazzling in its simplicity and wisdom, is about an Andalusian shepherd boy named Santiago who travels from his homeland in Spain to the Egyptian desert in search of treasure buried in the Pyramids. Along the way he meets a Gypsy woman, a man who calls himself king, and an Alchemist, all of whom point Santiago in the direction of his quest. No one knows what the treasure is, or if Santiago will be able to surmount the obstacles along the way But what starts out as a journey to find worldly goods turns into a meditation on the treasures found within. Lush, evocative, and deeply humane, the story of Santiago is art eternal testament to the transforming power of our dreams and the importance of listening to our hearts.

Santiago is a shepherd who has a dream and travels to Egypt on the basis of that dream. He processing the world through the idea that everyone has a "Personal Legend" that must be fulfilled, a concept that is both insightful and useless. It's mostly wielded to explain bad things by saying someone must not be taking actions in alignment with their Personal Legend, and that good things are from pursuing it.

I am reading a translation, so it’s possible that it’s more dazzling in the original language, but the version I’m reading is flat and boring. People think things, do things, then think about how they did things. It’s plodding and just shy of dull, I only finished it because I’m reading it for a book club.

Santiago is boring and insipid. I don't like him, neither as a character nor as a narrator. Santiago gets to know a few people but the descriptions of them are simple, categorical, and frequently xenophobic. He spends the longest with the crystal merchant, and that was the best section of the book. His interactions with women are flat and centered around his idea of them in a way that was off-putting for me.

I’m not sure how much worldbuilding was actually accomplished, and how much the book relied on me as a reader to know, for example, where Andulsia (in Spain) is in relation to Egypt. It uses the real world for its setting and relies on Biblical references for its fantastical elements, exploring new places through the naïve gaze of its protagonist.

The ending is so breathtakingly simple that I don’t know whether to applaud or be upset. It’s a journey story, which normally I would like, but this just didn't appeal to me at all. 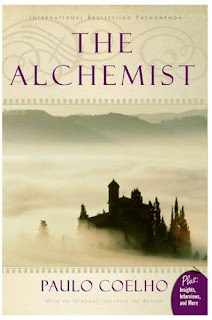