Before he was Batman, he was Bruce Wayne. A reckless boy willing to break the rules for a girl who may be his worst enemy.

The Nightwalkers are terrorizing Gotham City, and Bruce Wayne is next on their list. Bruce is turning eighteen and inheriting his family's fortune, not to mention the keys to Wayne Industries and all the tech gadgetry that he could ever desire. But on the way home from his birthday party, he makes an impulsive choice that leads to community service at Arkham Asylum, the infamous prison. There, he meets Madeleine Wallace, a brilliant killer with ties to the Nightwalkers. A girl who will only speak to Bruce. She is the mystery he must unravel, but is he convincing her to divulge her secrets, or is he feeding her the information she needs to bring Gotham City to its knees?

Bruce Wayne is proof that you don't need superpowers to be a super hero, but can he survive Madeleine's game of tense intrigue and deception?

Bruce and Madeleine have a strange relationship. It's complicated because she's a prisoner and he's a billionaire temporarily doing community service on her floor. I like their dynamic, it fits the playboy trajectory that is implicit for this character, where he wants someone who will run circles around him like Madeleine does.

This references enough subtle touchstones for the general run of Batman stories to feel grounded in that world while also establishing the rules of this one, where he's not Batman, he's just Bruce, and he's still a kid. It plays off of the huge inequities in Gotham City (even in just the existence of so many ultra-rich people available to be targeted by the Nightwalkers with seemingly little effort). It nods to things like the Batmobile and the Batsuit by having him being in a very fancy car and wear a suit (but not that suit) at one point.

The plot of what actually happens on the page makes a bunch of sense and I like it a lot. However, the justifications for why the major players are where they are and are doing what they're doing... that was very fuzzy and had a bunch of switch-ups as Madeleine is Bruce's main source for most of that backstory. She's canonically a liar but hard to know which specific things were lies at any one time, and I'm loath to just believe whichever story was in play when the narrative stopped moving. The ending mostly pulls it together and includes additional nods for things in the Batman canon. 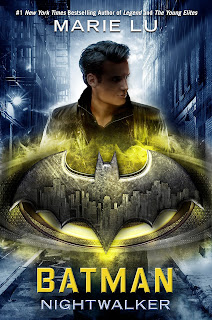