A few nights after Jessica Day arrives in Bixby, Oklahoma, she wakes up at midnight to find the entire world frozen. For one secret hour each night, the town belongs to the dark creatures that haunt the shadows. And only a small group of people--Jessica included--is free to move about then. They are The Midnighters.

THE SECRET HOUR is a tightly wound story about teens who can access the 25th hour of the day and must fend off the monsters which live there. The plot is engaging, the characters are a complicated mix of likable and morally grey, and the narration perfectly captures the tone and language of teens in the early 2000’s. Unfortunately for my enjoyment of it, the slang in that decade was very ableist, and that language is woven throughout the text at a level too frequent to be an accident, and too frustrating for me to even consider recommending it now.

The perspective switches between the characters who can see the secret hour, but Jessica Day is definitely the main character. Her arrival is what sets off the plot and escalates the creatures’ plans. I like how well thought-out the web of relationships is. The feeling of their interactions fits the history of when the characters met each other, draped with the baggage of their specific circumstances.

There’s a lot of infodumping but it’s justified by having a character who’s the self-appointed master of lore and is eager to share what he knows. The text also knows it’s a lot of info, and even though Jessica, the new girl, got a six-hour cram session, we as the readers get a much more succinct version at points where it was relevant to the plot. I love the thirteen-letter words and all the numerical weapons, ever since I first read this as a teen I've had some of the phrases memorized.

The main plot is pretty simple: new girl moves to town, meets the usual crew, finds out about the outsider, tries not to die, has some fun, then there’s a big dramatic showdown against the creatures. The showdown is genuinely cool, but not very many things actually happened.

I have a lot of fond memories of reading this series as a teen myself, but ultimately it’s too riddled with ableism, both in derogatory slang and its numerous jokes about the idea of mental illness without engaging with the reality of it. I no longer recommend it.

If you'd like something where teens save the world with math and language while dealing with temporal distortions, I recommend MIDDLEGAME by Seanan McGuire. A lot of things I loved about THE SECRET HOUR are found there, but better, and with a much more nuanced understanding of social isolation and mental illness. 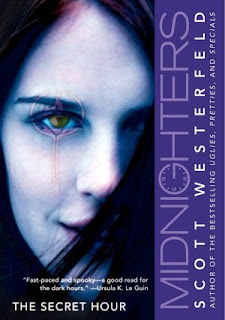