Ripped Away by Shirley Reva Vernick

Ignored yet again by his crush, Abe Pearlman wanders into Fortunes and Futures for a little diversion. The fortune teller reveals that Abe may be able to save someone's life. But before he can ask any questions, he's swept to the slums of Victorian London, where he finds that his crush, Mitzy Singer, has also been banished. Abe and Mitzy soon discover that they've been plunked down in the middle of the Jack the Ripper spree. To get back home, they'll have to work together to figure out how the fortune teller's prophecy is connected to one of history's most notorious criminal cases. They'll also have to survive the outpouring of hate toward Jewish refugees that the Ripper murders triggered. Ripped Away is based on real historical events, including the Ripper crimes, the inquests, and the accusations against immigrants.

RIPPED AWAY features a boy who finds himself in Victorian London during the Ripper murders, working with his crush who's also there, to try and get them both back home.

Abe’s main traits are that he doesn’t want to be here (which is understandable), he’s shy, and likes Mitzy. Abe and Mitzy have an unequal relationship because Mitzy is in the body of a blind girl and therefore her mama won’t let her do much of anything and he's her only way to exert any agency. It's hard to know whether the control exerted over her has a sexist component because the implication is that her blindness is more in the forefront of her mother's and uncle's minds than her gender is. Their relationship didn't necessarily have to be equal, but the book doesn't seem to examine the inequalities in the same way that it's taking the time to show and discuss the xenophobia and antisemitism.

The worldbuilding was pretty good for such a small book, it gave a sense of concrete things that Abe noticed which were different from his ordinary life. It felt pretty natural with very little infodumping. The plot revolves around trying to survive as Jewish kids in the wave of antisemitism and xenophobia which accompanied the Ripper murders, including trying to keep a Jewish man from being kept as a suspect due to an unrelated secret. It works overall, not trying to get very involved in the course of the murders but trying to hang on and figure out how their clues from the fortune teller relate to making it home. The actual murders are mostly important and a historical event that the reader might have heard of, they are not trying to figure out who did it or something like that.

The way that ableism generally and Mitzy's blindness specifically is handled is my main qualm with the book and it is the reason I don't recommend it overall. Spoilers abound from here on. Because Mitzy is used to being sighted she feels very vulnerable in her new blindness in addition to having unwillingly travelled through time. This puts Abe in the position of being the only one who explores, who can venture outside alone, and ultimately Mitzy needs him in order to get him but he doesn't really need her. He has a crush on her and therefore wants to interact with her, but it feels like she literally doesn't have a choice of whether to work together. She has a mysterious backstory which turns out to involve a previous illness which seems to exist only as a point of speculation for him and isn't otherwise examined in the story. It serves to explain why she didn't interact with him and was trying to be a loner at school, but it seems strange to me for her to have no other friends and it exacerbated the feeling that he's desperate for her but she only interacts with him because the circumstances and her new disability have forced her to. Both kids make comments about how terrible it would be for her to be blind forever. I'm not saying it wouldn't be bad (especially as Jewish kids in Victorian London), but the way they discuss it makes it seem like they consider it to be a truly awful fate. This rankled me, especially when the entire reason Mitzy is blind is because she's inhabiting the body of a girl who is blind (Maya). It felt especially dismissive of the kids they seem to have swapped with, there wasn't even a discussion of what Maya's experience might be if she's temporarily sighted from swapping with Mitzy. Because Mitzy's blindness was caused by the time travel, the kids aren't sure whether she'll be able to see when or if they are able to get home. The book plays with this uncertainty by having Mitzy initially unable to see when she first returns, this lasts long enough for both kids to panic and think she's blind forever. When it turns out to be temporary and her sight returns it seals this as a magical-cure narrative, wherein a disability lasts only long enough to be inconvenient for the bold adventurer and then is banished. 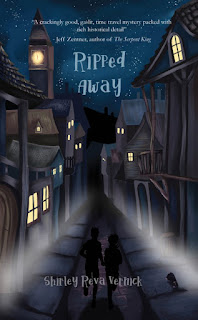