The Wall of Storms by Ken Liu (The Dandelion Dynasty #2)

Kuni Garu, now known as Emperor Ragin, runs the archipelago kingdom of Dara, but struggles to maintain progress while serving the demands of the people and his vision. Then an unexpected invading force from the Lyucu empire in the far distant west comes to the shores of Dara--and chaos results.

But Emperor Kuni cannot go and lead his kingdom against the threat himself with his recently healed empire fraying at the seams, so he sends the only people he trusts to be Dara's savvy and cunning hopes against the invincible invaders: his children, now grown and ready to make their mark on history.

THE WALL OF STORMS cements The Dandelion Dynasty as an epic saga which will outlast any one character, no matter how pivotal or beloved they may be. This is one segment in a generation-spanning saga of doorstoppers, where the fall of a person is transformative, but ultimately a blip in the crushing wave of a (very fascinating) history.

Zomi is a great addition to the series, she brings out something in wonderful in Luan Zya as he mentors her and it was nice to finally learn where he kept vanishing to. Kuni (now Emperor Ragin) takes a bit of a backseat in favor of Empress Jia and Queen Gin.

The worldbuilding is full of explanations of history, language, ecology, and inventions. Several of the characters love to explain things (Luan Zya is a major one, but not the only such scholar), and it feels natural each time because the information is said when it’s needed by some other character. In addition to exploring new parts of Dara, it introduces the windswept and harsh land of the Lyucu and the history of them as a people.

Empress Jia is a fascinating character and I hope her machinations go well because otherwise things might take some very bad turns going forward. Queen Gin is smart but prone to being politically outmaneuvered. Consort Risana seems like she got the memo way too late about her role having a political angle. Kuni is more in the background, playing a long game but not seeming to realize that by keeping his plan a secret he may be leaving fallow a field where others are sowing destructive seeds. Princess Thera grows up a lot and I quite like her by the end. I could sing Zomi’s praises for ages, she felt like the main character to me, but I recognize that other characters nay have had nearly as much time in the spotlight throughout the narrative.

This wrapped up several things which were left hanging, and includes several wholly new storylines which are introduced and resolved. It leaves some big things for later, they are mostly in the vein of "what happens next" since this series is an epic following a dynasty moreso than any one individual. The start of that was present in the first book, but things like spending so much of the book on Zomi and another major portion following the Lyucu help to drive home the scale of this series in a way that was glimpsed but not fully realized in THE GRACE OF KINGS. Because of how complete this volume is, and the kind of episodic focus each book brings to a grand history, it would actually completely make sense if someone started here and hadn't read the first book. The experience would be more meaningful if the reader knows the history of these characters, but the aforementioned pivot away from Kuni helps to make this accessible if someone started here instead of the first book. The previous events are treated much like the history of Mata Zyndu's court is treated in THE GRACE OF KINGS: they're referenced when needed, and some characters have very intense opinions on that history (especially if they were dramatically shaped by it), but a series has to start somewhere and this is what was chosen.

Zomi’s story is interwoven with the larger plot in a way that, while one clearly is earlier than the other, makes it feel wrong to think of the invasion storyline as the main plot. Zomi’s past is foundational to the empire’s future, and her travels with Luan Zya are informative and fascinating. The Lyucu invasion is handled really well, with perspective characters and occasionally nested stories are chosen to cover a breadth and depth of narrative that wouldn’t be easy otherwise. 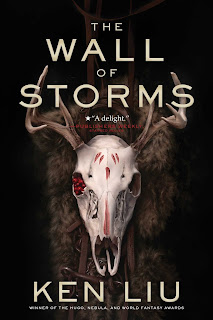