The Long Way to a Small, Angry Planet by Becky Chambers (Wayfarers #1)

Follow a motley crew on an exciting journey through space—and one adventurous young explorer who discovers the meaning of family in the far reaches of the universe—in this light-hearted debut space opera from a rising sci-fi star.

Rosemary Harper doesn’t expect much when she joins the crew of the aging Wayfarer. While the patched-up ship has seen better days, it offers her a bed, a chance to explore the far-off corners of the galaxy, and most importantly, some distance from her past. An introspective young woman who learned early to keep to herself, she’s never met anyone remotely like the ship’s diverse crew, including Sissix, the exotic reptilian pilot, chatty engineers Kizzy and Jenks who keep the ship running, and Ashby, their noble captain.

Life aboard the Wayfarer is chaotic and crazy—exactly what Rosemary wants. It’s also about to get extremely dangerous when the crew is offered the job of a lifetime. Tunneling wormholes through space to a distant planet is definitely lucrative and will keep them comfortable for years. But risking her life wasn’t part of the plan. In the far reaches of deep space, the tiny Wayfarer crew will confront a host of unexpected mishaps and thrilling adventures that force them to depend on each other. To survive, Rosemary’s got to learn how to rely on this assortment of oddballs—an experience that teaches her about love and trust, and that having a family isn’t necessarily the worst thing in the universe.

THE LONG WAY TO A SMALL, ANGRY PLANET is about a ship, a crew, a space journey, and the friends they made and (or sometimes tragically lost) along the way.

There are a lot of characters and they generally feel distinct from each other. That means I can't really point to an overall style, other than that once I tracked names enough to tell Jenks and Ashby apart I did all right for the rest of the book (I kept mixing up who was with Pei).
main character - If anyone is the main character it might be Rosemary, she's definitely the reader's way into the narrative as a human who doesn't have any travel experience and is generally unfamiliar with the people and places that they encounter on the way. Because she isn't the only point-of-view character there's a pretty robust diversity not only of perspectives but of angles for explanation.

The ship has a relatively small crew but it's enough to make a character relationship web complicated pretty quickly. Ashby is the captain, which means he doesn't pal around with the crew much but still is close to most of them. I like his relationship with Pei, it's nice to see a long-distance thing portrayed well. Jenks and Kizzy have a friendly working relationship and a great rapport. They get along even when they're getting on each other's nerves, which is good since they're generally working on ship maintenance together. Sissix is my favorite, and I like how she is with Rosemary, especially towards the end. There's even more crew and I'm very bad with names, so that's about my limit of what I can remember and say without spoilers. Generally speaking I like the way that non-human characters have conversations and relationships with each other that don't have anything to do with the human ones. It helps reinforce the feeling of a galaxy that isn't centered on humans, which is definitely a welcome departure from a lot of space sci-fi.

Most of the worldbuilding in terms of physical spaces is focused on the ship, with a few visits to other worlds on the way. Where it shines is in establishing the impression of a full galaxy with complicated dynamics of which we're just getting a tiny slice. I love the descriptions of various aliens, and the way the characters make a specific effort to understand other perspectives and ways of being.

For the first half of the book I was lukewarm, having trouble getting into it but having a good enough time to continue. It more than paid off in the second half, wow. There are a lot of important characters by virtue of paying attention to the entire crew plus a few additional people. Because the big thing that's happening is they're traveling a very long way to a specific destination, plus some stops and occasional complications along the way, most of the plot revolves around developing and continuing relationships between the characters. The main journey is to slowly travel to somewhere very far away for a specific reason, and then because of the tech involved they'll be able to get home very quickly. It makes the ending feel climactic even though technically all they did was go a long way away and then come right back to where they started in a fraction of the time.

The ending is devastating. The emotional culmination of getting to know these characters runs into the dangers of their journey in a way that is sudden, frightening, and grief-stricken. If you like found-family journey stories (especially ones in space), don't miss this one. 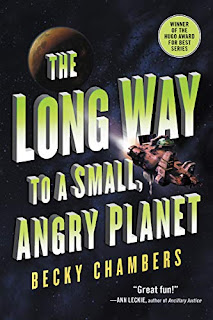