​Caiden has been on the run for ten years with his unique starship in order to keep his adversary, Threi, imprisoned. But when an old friend he'd once thought dead reappears, he is lured into a game of cat and mouse with the one person whose powers rival Threi's: Threi's sister Abriss. Now with both siblings on the hunt for Caiden and his ship, Caiden must rescue his long-lost friend from their clutches and uncover the source of both his ship's power and his own origins in order to stop Abriss's plan to collapse the multiverse.

But his old friend has changed far more than Caiden could have ever imagined, and if he wants to save her, he's going to have to call on his old crew to help him get her back. But what if she doesn't want to be saved?

I tried to get into this, but it just didn’t happen. I liked the first one, but something about this just didn’t work for me.

A big part of the issue is that I can’t form mental images of things I haven’t seen, and as the locations and action became more strange and more focused on technically-not-magic space power battles and pocket universe stuff it creates long stretches when the only thing I could focus on is Caiden’s thoughts about things. You may recall from the last book’s review that I don’t really like Caiden, and I didn’t like him any better here. 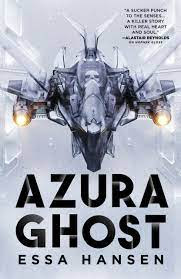