Just as they are enjoying a day at Briny Beach, the three Baudelaire children--- 14-year-old Violet, 12-year-old Klaus and baby Sunny--- receive some bad news. Mr. Poe, a friend of the family, comes trekking across the foggy beach to tell the Baudelaires that their parents have died in a fire that also burned down the family mansion. Now orphaned, the Baudelaires face an uncertain future. They are soon packed off to their new guardian--- the icky Count Olaf, who is a distant cousin. But when they move in with the Count, the Baudelaire children are certain that he does not care about them--- he only wants to get his hands on the fortune Mr. and Mrs. Baudelaire left behind. See if they are right, as you read this exciting and humorous tale of mystery.

I read this series originally as a kid, and I loved them when they first came out. Re-reading them as an adult, I appreciate what they meant to me but I don't know if I'll recommend the series as a whole when I finish my re-read.

THE BAD BEGINNING is the start of Count Olaf's attempts to get the fortune of the Baudelaire children, newly the Baudelaire Orphans, with the deaths of their parents as the book begins. When Count Olaf finds out that merely being the childrens' guardian is not enough to obtain their fortune, he attempts to marry Violet in an elaborate ruse.

One of the villains is a large non-speaking person of indeterminate gender… and that’s pretty much it as the story’s justification for monstrosity. They’re socially marginalized and in the proximity of Count Olaf, therefore they’re creepy. While being in Olaf’s troupe is indeed sufficient grounds to be deemed terrible, this person is described in dehumanizing language by the narrator. Even the hook-handed man has specific dialogue where his actions are monstrous separate from his physical abnormality, but the non-gendered person is treated as though their mere existence is monstrous. Because the various troupe members are referred to by physical descriptions rather than names, there is a repeated emphasis on their strange appearances, which just reinforces the issue. I don't consider them to be queer representation because they don't provide any statement of their identity, it's just that the narration states that the Baudelaire children read their gender as ambiguous, which (in this context where ambiguous equals creepy) is judgmental and meaningless.

I know why this series gripped me as a kid, but I don't recommend this book now because of the way it equates physical difference with bad intentions, lumping in choices (like wearing all-white makeup) with physical characteristics (like baldness or being fat). It could have just been that the children are frightened by adults in the company of an adult who has declared his intentions to do them harm, but the way dehumanizing language is used makes it feel like the narrator shares in moral condemnation of the way certain characters look. 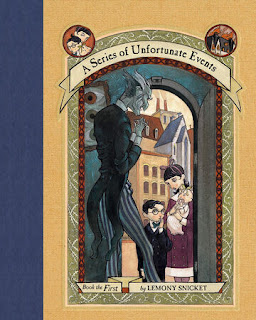