On the Edge of Gone by Corinne Duyvis

January 29, 2035. That's the day the comet is scheduled to hit--the big one. Denise and her mother and sister, Iris, have been assigned to a temporary shelter outside their hometown of Amsterdam to wait out the blast, but Iris is nowhere to be found, and at the rate Denise's drug-addicted mother is going, they'll never reach the shelter in time. A last-minute meeting leads them to something better than a temporary shelter--a generation ship, scheduled to leave Earth behind to colonize new worlds after the comet hits. But everyone on the ship has been chosen because of their usefulness. Denise is autistic and fears that she'll never be allowed to stay. Can she obtain a spot before the ship takes flight? What about her mother and sister? When the future of the human race is at stake, whose lives matter most?

ON THE EDGE OF GONE is tense and well-crafted. It hits the ground running by proclaiming that the characters are already under the particular sort of doom that accompanies setting off for a 45-minute drive with only 30 minutes to get there. Except their destination is a shelter to preserve their lives when the comet hits, and there’s no way they’ll make it in time. In fact, they don’t. Instead they take a chance and help some strangers who are just as late, but for a different shelter that offers a more immediately obtainable but ultimately precarious hope: that of exiting the planet on a generation ship. There’s a limited number of spots, Denise’s sister didn’t meet up with them before the comet, and her mom wasn’t able to get clean before things got bad.

The end of the world is never a great place to be, and this focuses on the concerns of someone who isn't obviously in a position to make big decisions or changes. She contributes in crucial ways, but none of them are from being some big damn hero, but just being a person who sees something needs doing and tries to take care of it as best she can.

The opening is one of the most viscerally stressful things I've read, while making me need to keep reading. I instantly related to Denise because as a kid I had years of hearing "just 10 more minutes" from the person who was my ride somewhere. It instantly connected me to the character and made the rest of the stakes relatable in a way that leaving on time but having an obstacle afterwards simply would have missed, even though the eventual outcome would be the same.

Denise’s autism is inextricable from the story, shaping her reactions and how the other characters react to her. Hers is just one way that being autistic can appear and feel, and the descriptions of what she thinks versus what she can get herself to actually say contribute to the tension in the narrative. The plot is driven by social interactions, both in the attempts to navigate this newly-formed community aboard the docked ship and in interactions with scattered survivors foraging amongst the wreckage of the old world. Some misunderstandings come from allistic and autistic communication differences (especially early on when more of the characters are strangers), but it never felt like that gap was cheaply used. 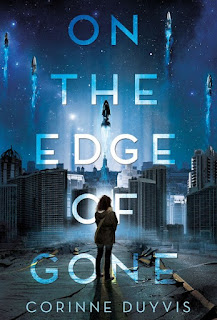