Along The Saltwise Sea by A. Deborah Baker (The Up-and-Under #2)

After climbing Over the Woodward Wall and making their way across the forest, Avery and Zib found themselves acquiring some extraordinary friends in their journey through the Up-and-Under.

After staying the night, uninvited, at a pirate queen’s cottage in the woods, the companions find themselves accountable to its owner, and reluctantly agree to work off their debt as her ship sets sail, bound for lands unknown.

But the queen and her crew are not the only ones on board, and the monsters at sea aren’t all underwater.

The friends will need to navigate the stormy seas of obligation and honor on their continuing journey along the improbable road.

Writing as A. Deborah Baker, New York Times bestselling and award-winning author Seanan McGuire takes our heroes Avery and Zib (and their friends Niamh and the Crow Girl) on a high seas adventure, with pirates and queens and all the dangers of the deep as they continue their journey through the Up-and-Under on their quest for the road that will lead them home...

Welcome to a world of talking trees and sarcastic owls, of dangerous mermaids and captivating queens in this exceptional tale for readers who are young at heart in this companion book to McGuire's critically-acclaimed Middlegame and the sequel to Over the Woodward Wall.

ALONG THE SALTWISE SEA follows Avery, Zib, the Crow Girl, and Niamh as they leave the Improbable Road and find themselves in debt to a pirate captain on the Saltwise Sea.

The beginning recap is one of my favorite ways to handle a recap. It eased me into the rest of the story by setting the tone of the narration and marking both the literal events which happened and what they meant for the characters as people. Given the storybook feeling to the tone, this was appropriate and very welcome.

Avery and Zib are growing up in a way that involves stress and disappointment in the middle of what is otherwise probably an adventure, and part of their maturing is figuring out why certain things affected them or others in the way that they did. I enjoyed how much more this book focuses on the Crow Girl, exploring her nature by temporarily denying her the ability to transform.

The world-building is gradual and layered, building on what was in the previous book in little moments as each bit of the world's rules becomes relevant to their current situation. It helps keep those moments from feeling like lore dumps, and they tend to be sufficiently brief to keep the momentum moving.

This didn’t specifically wrap up anything left hanging from the first book, it mainly continues the journey right where OVER THE WOODWARD WALL left off. The whole main storyline starts here and wasn’t present previously, with several major things both introduced and resolved. It leaves several things to be addressed later, but they’re more in the vein of lightly examined bits of the worldbuilding which the narrator has promised and/or teased will be important later in their journey (i.e. in a later book).  The (unnamed) narrator seems to be the same, though their tone felt a little bit grimmer than before. Since ALONG THE SALTWISE SEA is a more disillusioned stage of Avery and Zib’s journey, this fits the book but definitely felt a little different. The narrator retains their benevolent and knowing tone, and overall it works well.

I'm excited for the next step for these characters, and I'll definitely keep reading the series. 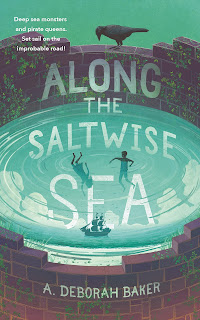