From the start of this extraordinary debut, Nana Kwame Adjei-Brenyah's writing will grab you, haunt you, enrage and invigorate you. By placing ordinary characters in extraordinary situations, Adjei-Brenyah reveals the violence, injustice, and painful absurdities that black men and women contend with every day in this country.

These stories tackle urgent instances of racism and cultural unrest, and explore the many ways we fight for humanity in an unforgiving world. In "The Finkelstein Five," Adjei-Brenyah gives us an unforgettable reckoning of the brutal prejudice of our justice system. In "Zimmer Land," we see a far-too-easy-to-believe imagining of racism as sport. And "Friday Black" and "How to Sell a Jacket as Told by Ice King" show the horrors of consumerism and the toll it takes on us all.

Entirely fresh in its style and perspective, and sure to appeal to fans of Colson Whitehead, Marlon James, and George Saunders, Friday Black confronts readers with a complicated, insistent, wrenching chorus of emotions, the final note of which, remarkably, is hope.

FRIDAY BLACK is a finely constructed collection of stories which range from simply invoking a certain kind of Black and American existence, to ones where the premise is inextricable from the intersection of these identities.

Some of them have not literally happened but feel like they could if reality got just a little bit worse (or, more awfully, like they’re already here). Others are more speculative, requiring some shift in reality in order to be plausible, or being altogether impossible. In all of them, the relevant social and existential rules are deftly conveyed to build tiny pockets of a different space, in which a story is told that believes its own premise unabashedly and wholeheartedly.

Three of the stories have a shared underlying reality, but I’m not certain whether the others are meant to be connected with them or not. None of the premises are mutually exclusive, but a few would definitely be oddly paired if they canonically coexist. My favorites are “Zimmer Land” (for the way it shows the precarious position of a marginalized employee in a job which objectifies his existence even as it exploits his identity), Friday Black” (for making shopping feel like a zombie story), and “Through the Flash” (for unflinchingly capturing the potential and inevitability of brutality in a certain kind of time loop).

CWs for individual stories are listed below.

“The Hospital Where” - CW for medical content, pregnancy (brief mention).

“The Lion & the Spider” - CW for cursing, racial slurs, racism.

“How to Sell a Jacket as Told by IceKing” - No major CWs. 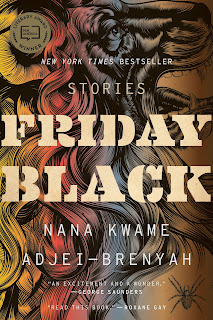